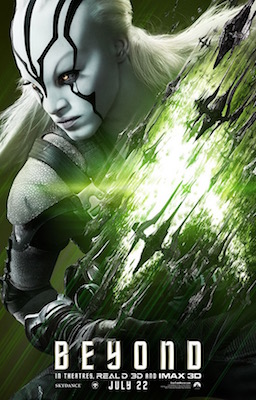 If there was any doubt whether the current cast had the strength and talent to carry the Star Trek movies forward, Star Trek Beyond shattered that doubt. It is a thrill ride from its humorous opening scene to its final shot of a starship under construction. Once again J.J. Abrams, acting as producer rather than director this time, gave us a film where everything–from the writing to the acting, from the musical score to the visual effects–join to present a compelling story about the starship USS Enterprise and its crew. It is a story driven by plot, but it is also a story of strong characters on an heroic journey of survival. If the heroic journey of Star Trek concerned Kirk and Spock setting aside their differences to learn to work together, and the heroic journey of Star Trek Into Darkness was Kirk learning what it means to be a starship commander, then the heroic journey of Star Trek Beyond is the crew of the Enterprise learning to work together to achieve a common goal.

Simon Pegg, who plays Scotty, cowrote Beyond with Doug Jung. Justin Lin replaced Abrams in the director chair. Once again Michael Giacchino wrote the score. A wonderful job he did too! I usually don’t write about the music in movies, because since I never studied music, I fear I don’t have the vocabulary to write about it. But as I watched Beyond, I became aware of how the music added to the tension and events on the screen. That is rare for me, to realize that the music was adding to my enjoyment of the movie. No doubt, a well-written score always adds to the movie, but for me that tends to be in a subliminal way. With these Star Trek movies, and especially with Beyond, the effect was not subliminal but conscious. And I appreciated the movie that much more because of it.

The photography and visual effects were beautiful and convincing. Gone are Abrams’ lens flares–good riddance! In movies, we want photography that draws us into the story without distracting us from the action or characters. Cinematographer Stephen F. Windon achieved just that. The photography fused with the CGI to create fascinating visuals that helped us believe in the movie. While writing about the look of the film, I would be remiss if I didn’t write about the make-up. Aliens play a major role in Beyond, too major to rely on CGI to create them. Since the aliens are humanoids, the make-up department was able to create the looks for them that are beautiful, interesting, and most importantly, convincing. I particularly like the look they created for Kalara, played Lydia Wilson. 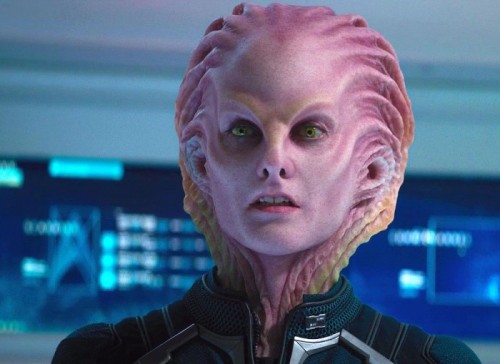 The plot of Beyond is a Star Trek plot. It’s reminiscent of so many episodes from the original series. Three years into its 5-year mission to explore deep space, the Enterprise heads out on a rescue mission that proved to be a trap. They entered a nebula, where they encountered Krall (Idris Elba). Hateful of the Federation and its growing influence in the universe, he and his army attack the Enterprise and gain the upper hand. To survive this, each member of the crew must travel his or her own heroic journey. I like that about this movie, the way they expanded and balanced the roles of several characters. This is less a story about Kirk and Spock, less a conflict between Kirk and Krall, and more a story about the Enterprise and its crew and their coming together to defeat Krall.

As such, this is a character story. Since there were several characters on their own heroic journey, without the screenplay cheating any of them, Pegg and Jung wrote a remarkable story. And they found humor in Spock’s struggle to understand human ways without robbing him of any dignity. That was a tightrope that they walked without falling. No doubt they were helped by grounding the screenplay in the Star Trek tradition created by Gene Roddenberry.

Chris Pine reprises his role as Captain Kirk, and Zachary Quinto plays Spock. In fact, there has been no cast changes for the Enterprise crew. Zoë Saldana, John Cho, and Anton Yelchin play Uhura, Sulu, and Chekov. Simon Pegg, as I mentioned, plays Scotty. Along with Elba as Krall and Wilson as Kalara, the movie introduced Sofia Boutella as Jaylah. She is my favorite character introduced so far in this series, but she reminds me of Rey (Daisy Ridley) from Star Wars: The Force Awakens. She lives alone on a planet where she has to eke out a living by scavenging. A capable fighter, she’s independent and strong-willed. She’s a strong female character in a franchise that–let’s be honest–has been a light on strong female characters. I hope we see more of Jaylah as the franchise goes forward. 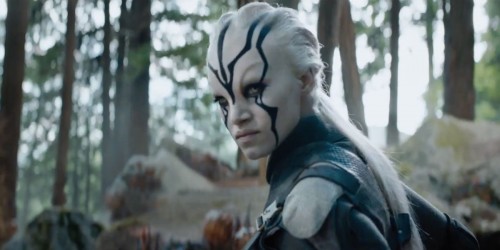 I usually shy away from absolutes, but I feel no hesitation in telling you that this is the best movie I’ve seen so far this year. I also feel no hesitation in saying that of the Star Trek reboot, this is my favorite. It was definitely the one that moved me the most. Several times during the film, my eyes teared up. They were still teary as I left the theater. Even now, three days since seeing it, I am moved by the struggles and experiences of the Enterprise and its crews. When I texted a friend that I had seen the movie and liked it, she texted back that she wanted to see it.