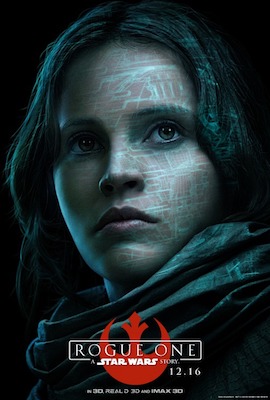 Though it has a different tone and a different focus than other Star Wars movies—less mystical and more action—Rogue One offers everything we came to expect from the franchise. It tells the story about everyday people caught up in events much larger than themselves, but who rise to the challenge and achieve their goals. That was part of the charm of the original Star Wars for me—Luke Skywalker, a simple water farmer from Tatooine, found himself matching wits, strength, and conviction against Darth Vader, the most powerful Sith Lord. Who could’ve guessed Luke would be the one to destroy the Death Star? This charm of the everyday person rising to combat great evil was something forgotten in the prequels. With Rey in The Force Awakens, the franchise returned to this core element, its heart, and with Jyn Erso, it introduces another everyday person caught up in events much bigger than herself.

Directed by Gareth Edwards, who gave us the 2014 version of Godzilla, Rogue One is a prequel in the truest term. I ends where the original Star Wars: A New Hope begins. It details the events that led to Princess Leia having the Death Star plans that Darth Vader sought. Prequels are weird, because we know where they have to end and that steals some of the suspense out of the movie. Since we know our heroes stole the plans, we go into the movie knowing the answer to the central plot question. Since we know the ending, the journey from the beginning to the end has to be interesting, entertaining, exciting, and well-worth the ride. The screenplay by Chris Weitz and Tony Gilfoy delivers on this need. It gives us the two essential ingredients of a good story—sympathetic characters and dramatic conflict. If the original Star Wars trilogy is—as I would label it—science fantasy, Rogue One is best described as science fiction action. And since the action is military, it feels more like Saving Private Ryan than The Force Awakens.

Felicity Jones stars as Jyn Erso. Since her father, whom she hadn’t seen since her childhood, was an important, but reluctant, scientist helping to build the Death Star, the Resistance believed Jyn would be the perfect spy to discovery what the Death Star is and what it can do. They teamed her with Cassian Andor (Diego Luna), a professional spy, and they join forces with two drifters—Chirrut Imwe (Donnie Yen), a blind former Jedi Knight, and Baze Malbus (Wen Jiang), his weapon-skilled sidekick.

En route on this mission, they met Saw Gerrera (Forest Whitaker), a rogue rebellion leader, more terrorist than soldier, who provides Jyn with a vital clue about her father. They also met Galen Erso (Mads Mikkelsen), Jyn’s father, and Orson Krennic (Ben Mendelsohn), the commander in charge of building the Death Star. The climax takes place on an ocean-laden planet called Scarif, where Jyn and her team made a desperate attempt to steal the Death Star plans.

Everything about Rogue One is solid—the writing, the directing, the acting. Greig Fraser’s photographer was beautiful and convincing. The CGI blended well with the live-action, but Hollywood is getting so good with CGI that that’s more an expectation than a surprise. The costumes and settings helped create a material culture for this galaxy far, far away. And this installment gave us the stables of a Star Wars movie—dog fights in space, blaster battles, and wry dialogue. Like The Force Awakens, it has a dark tone, and it reminds us that in war, even the good guys have to do bad things. I like that about Rogue One, that it feels more realistic and cynical than the other Star Wars movies. It is less about The Force and more about the secular world those everyday characters must live in and survive.

I saw Rogue One in 3D. Often when I see a movie in 3D, I leave the theater feeling I’ve been cheated out of the extra cost. Whether I liked the movie or not, I rarely find 3D worth the price. Now whether I see a movie in 2D or 3D depends on what showing is most convenient for me. But I had a feeling about Rogue One that 3D would be worth it. And it was. But whether you choose to see it in 2D or 3D, do see it. Rogue One is an exciting action movie that extends the Star Wars franchise in a fresh direction.