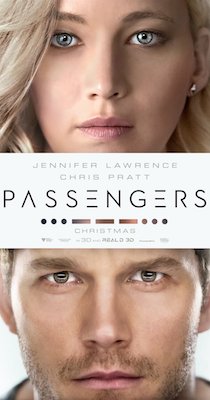 Passengers, directed by Mortem Tyldum, is a science fiction adventure that doubles also as cerebral science fiction. It is not as cerebral as 2001: A Space Odyssey (1968), Sunshine (2007), or Interstellar (2014), but it is forces you to stop and think and to ponder about what you have seen. From that perspective, I like Passengers, but that like is mitigated by several plot problems I have with the movie. It is an enjoyable movie, but I left the theater feeling dissatisfied. It strived to balance itself between being an adventure flick and an intellectual piece, but when that balance topples, it denied itself greatness in either area.

Two passengers on a 120-year voyage to colonize a new planet woke from stasis with 90 years to go. They discovered that there is no way to go back into hibernation, because—the information booth tells them—there had never been a stasis pod failure and it’s impossible for a stasis pod to fail. Yes, and the Titanic was unsinkable. I have a slight problem with this premise, because it seems unlikely that this company that organized this interstellar cruise ship wouldn’t have some backup plan for stasis pod failure. It seems like a not-enough-lifeboats-on-the-Titanic oversight. But there were lifeboats on the Titanic, so why wasn’t there a stasis machine on the Avalon? This was one of several plot details that didn’t make sense to me. Like a woodpecker pecking a tree, these details pestered me during the movie and since. I believe writer Jon Spaihts should’ve spent more time thinking about the premises and its logic to better deal with these plot bugs.

But the fault might not of been his. He might’ve started writing a character-driven drama about a man trapped awake on a interstellar space journey—a Robinson Crusoe story—when someone up the food chain said there needs to be a woman and someone else said there needs to be imminent danger. That’s only speculation on my part, but the movie has three distinct parts that feels as if Spaihts started to write one store but ended up writing another. The first part, the Robinson Crusoe part, involves Jim Preston (Chris Pratt), who wakes up 30 years into the 120-year voyage. He works through the stages of grief—from denial to anger to sorrow to acceptance, only to end up at self-pity. Loneliness weighs on him. But then Aurora Lane (Jennifer Lawrence) also wakes from stasis. Here, I thought when that happened. This is when the movie should’ve began. I can’t tell you why I thought that without spoiling the plot, but I believe the movie would’ve been better told with her as the main protagonist. 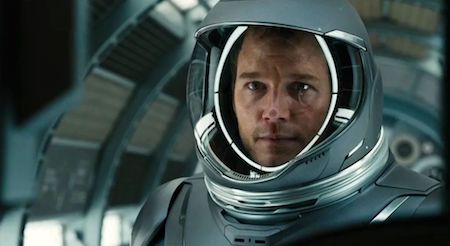 Once she wakes up, the movie enters it second phase—the romantic phase. The last man, the last woman, compatible ages, both good-looking—I like those odds! Yes, they hook up. If you didn’t know that from the trailers, I apologize for spoiling that for you. So their romance defines the second plot phase, making it one of the sexiest science fiction I’ve seen in years. But that phase ended when Chief Engineer Gus Mancuso (Laurence Fishburne) also wakes from stasis. From him they learned there were worst mishaps than stasis failures going on in this ship, and they must fix it. Now comes the imminent danger phase, which felt tacked on at the end of this 2-hour film, because Hollywood movies needs more action than Passengers had yet to provide. If feels as if each of these three phases deserve their own review, because Passengers feels like an anthology of three short films played as one full-length feature. They share characters and setting, but not tone. The tone of the Robinson Crusoe phase is psychological, but that turned romantic during the middle phase, which gave into action for the final phase. It ended in a tight happy ending—as Hollywood movies are wont to do.

The happy ending, I thought as the end credits rolled, ruined the movie. 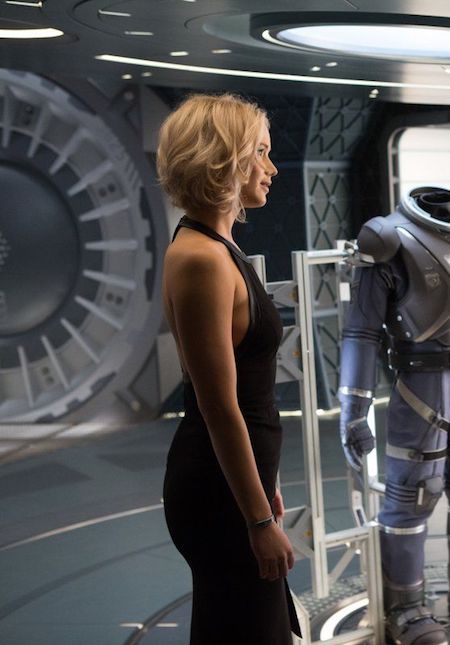 That’s unfair, in retrospect, because I think, despite its faulty structure, Passengers is a film worth seeing. The plot is its weakest element. The characters are interesting, and the interaction between them are believable. The actors gave excellent performances. Chris Pratt is popping up everywhere, and I have enjoyed his performance in everything I’ve seen him in. Next to The Hunger Games and X-Men: First Class, this is only the third Jennifer Lawrence movie I’ve seen, but her performance here inspires me to check out more of her existing work and to look forward to her in future films. I liked Fishburne’s Gus, but he was introduced too late and his entire character feels like a plot device. Michael Sheen plays Arthur, and android bartender. Again this character feels like a plot device, giving the stranded Jim someone to interact with during the Robinson Crusoe phase—a Friday to Jim’s Crusoe.

Perhaps the biggest star of the movie is the setting. The Avalon, the star cruise ship they’re on, feels like a luxury liner. It has a mall-like concourse with expensive shops, fine dining restaurants, and jogging terraces. It has observation decks, where the passengers can sit and watch the passing suns. It has the luxury bar where Arthur works. It bothers me that all of this was up and working when Jim woke up. Wouldn’t these facilities be in power-down mode when the passengers were in stasis? Passengers asks you to gloss over such questions, but there are too many of them—and I hate glossing over questions. Collectively, they made the movie feel unrealistic, breaking me out of my fictional daze. Most of the special effects felt rushed and looked CGI, but there was one scene of a swimming pool in zero-gravity that was exciting and believable. It was the best scene in the movie. It was clearly the most exciting and tense scene. I wish more of the movie was like this.

I think Passengers is a movie worth seeing, but I also think it’s a movie you might want to wait for home viewing. It’s structure is weak. The characters are interesting, but some of their motivations—particularly why they were traveling to the new world—felt less than convincing. The visuals were fun, but nothing about them screamed MUST SEE ON THE BIG SCREEN. Since it couldn’t decide whether it wanted to be a psychological drama, a love story, or an action thriller, it struggled to be all three. It makes for a movie that is good, but not great.