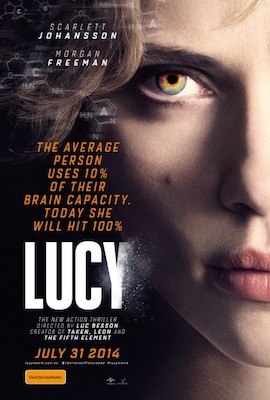 IMDB labels Lucy as science-fiction, but I prefer to think of it as fantasy. It’s foundation is the popular but debunked misconception that human beings use only ten percent of their brain, and it posits a scenario where tapping into the other ninety percent gives us extra-human abilities like telekinesis, telepathy, and omniscience. In other words, it turns us into gods on Earth. In other words, it gives us magic. Magic belongs in the fantasy genre, not the science fiction genre. Fantasy is also the genre where I allow a break from acceptable scientific facts—like we use one hundred percent of our brains. It’s the genre where I’m willing to stretch my willing suspension of disbelief outside the world I know exists and into the world that’s fun to imagine exists.

Judging it as a science-fiction movie, I would think Lucy a stupid movie with an unrealistic plot. Judging it as a fantasy film, it becomes a fun-but-flawed action thriller that imagines a world where humans can acquire unlimited power. Written and directed by Luc Besson, it stars Scarlett Johansson as the title character. Morgan Freeman and Amr Waked play her allies, and Choi Min-sik plays the main antagonist, Mr. Jang.

Lucy is an American exchange student in Korea who becomes mixed up with a drug smuggling boyfriend. After he talks her into delivering a package to Mr. Jang, Jang captures her and implants drugs into her torso. The idea is she’ll fly back to the States, where the drugs will be removed and marketed. Great plan, until one of Jang’s henchmen kicks her in the belly and breaks the drug container. Instead of killing her, as drug overdoses are wont to do, this overdose allows her to tap into that mythical ninety percent of unused gray matter. Along with giving her telekinesis and telepathy, it gives her superhuman strength and superior weapon skills. What follows is an action movie that strives to be more cerebral than most but fails. The action sequences are the main reason to see Lucy.

With two exceptions, I would rate the performances as credible without being memorable. It’s always good to see Freeman on screen, but this was during a spell in his career when he was performing minor roles in several movies, and he wasn’t giving much reach to any of them. As Professor Norman, he’s one of the world’s leading authorities on the brain, and I believe that because the movie told me it was true. Nothing about his performance suggested brilliant scientist. Waked plays a French cop without much to do in the movie. I fear the filmmakers cast him as a male counterpoint for Johansson’s good looks. A little something for the ladies, if you will. In one scene, he asked Lucy why he’s there—I was wondering the same thing myself—and for an answer, she kissed him. 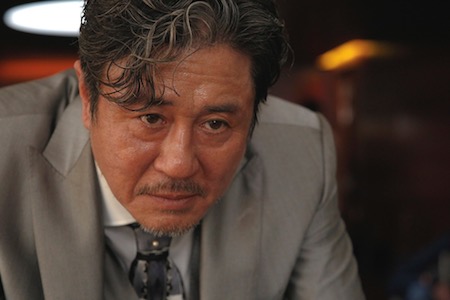 Johansson provides the first exception to these mediocre performances; in fact, she gave the best performance I’d ever seen her give. The screenplay calls for several long soliloquies by her, and during these soliloquies, she shined. I’m thinking about one in the middle of the movie, when she’s confronting Mr. Jang to get information. Everything about her delivering and facial expression added tension and conviction to the curious things she had to say. Rewatching this soliloquy is the primary reason I want to see Lucy again. But my best actor award goes to Min-sik. He plays a ruthless gangster who makes those guys in Goodfellas look like  pushovers. Sometimes he’s subtle, sometimes he’s viscous, but at all time, he’s evil.

I found the editing, especially at the beginning, distracting. Whether that’s Besson’s doing or editor Julien Rey’s I do not know, but I do know that it didn’t work for me. They interlaced movie scenes with nature footage. In one example, as Professor Norman was talking about reproduction, they cut to a montage of mating animals. Okay, we all love our animal porn, but I wanted to see an action film. You know, with human stars. In another example, as Lucy was falling into Jang’s trap, they interwove it with scenes of lions hunting zebras in Africa. Since the metaphor was too precise to be cleaver, it annoyed me. Either I became inured to these interruptions or they stopped using them during the film, because I don’t recall any late movie examples. As the movie played, it flowed better and the editing choices felt more conventional. It ended in a CGI overload that caused one character to ask, “What just happened?” I was wondering the same thing, but it didn’t help the movie’s cause that a character asked it. There was also a gunfight and a some entertaining explosions, so everything’s cool. Right?

When in doubt, Hollywood, blow something up.

Lucy is available for home viewing; I watched it on a DVD received through Netflix DVD. Lucy is an entertaining movie that has more weaknesses than strengths, but its strengths justify seeing it. I fear it suffers an identity crises. Does it want to be an action movie or a science fiction thriller? Does it want to capture an audience who desires to see Johansson kick ass? Or is it after viewers craving more drama and thought-provoking themes? It strives to be all of these without succeeding to being any of them. As I said above, the plot is based on a debunked fallacy, so it’s best to think of it as a fantasy. As a whole, it’s a mess, but it has some interesting scenes worth seeing. It’s a popcorn flick—a nice snack, but, you know, it lacks protein. 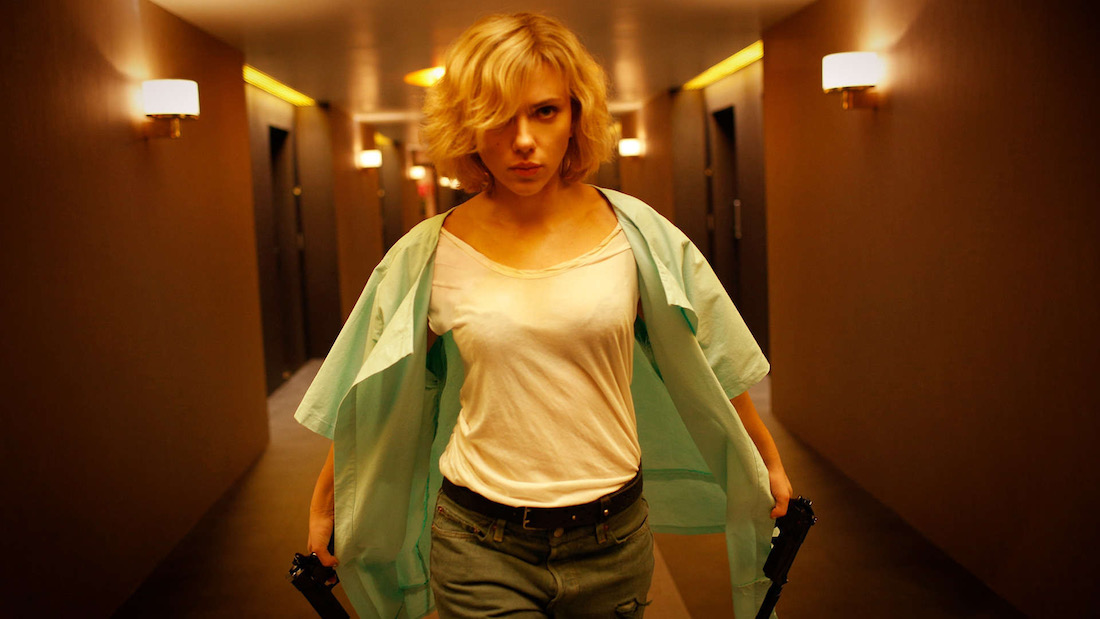