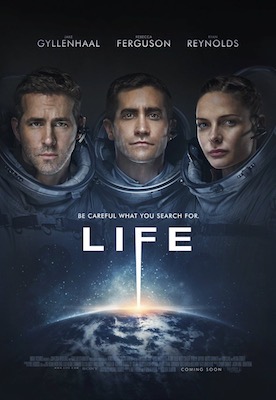 Six astronauts on the International Space Station (ISS) recover a probe returning from Mars, where it drilled into the soil looking for life. Following careful protocols, called firewalls—since any extraterrestrial life form, even a germ or a bacteria, could be harmful for life on Earth—they processed the samples and discovered a single-cell organism. Ecstatic, they named it Calvin, a name selected by an elementary school that had won a contest. But Calvin soon grows into an animal that is nothing but muscle and brain. And it does not like being cooped in “the box.” If finding proof of life elsewhere is man’s greatest dream, Calvin turns it into his worst nightmare.

Life’s biggest weakness is the predictability of its plot. If you’ve seen the trailer, you know the plot. That doesn’t mean that the action lacks surprises, because there were several shocks and surprises to be found within the predictable plot. Though I always knew what was coming next, I was always excited to see it. Daniel Espinosa directed Life, from a screenplay by Rhett Reese and Paul Wernick. Seamus McGarvey acted as cinematographer. At 1 hour and 44 minutes, it’s a short, action-pack movie that delivers both suspense and frights.

Rebecca Ferguson, who impressed me in Mission Impossible: Rogue Nation (2015) plays Miranda North, the officer in charge of the mission. She’s backed up by Jake Gyllenhaal as Dr. David Jordan, who had set the record for the longest stay in space, and by Ryan Reynolds as Rory Adams. Ariyon Bakare plays Hugh Derry, the biologist in charge of handling Calvin. Hiroyuki Sanada and Olga Dihovichnaya play Sho Murakami and Ekaterina “Kat” Golovkina, the crew members in charge of flying the ISS. None of these actors had a small role in the movie; in fact, one of the big strengths of Life was its balance of characters. Though the movie spent little time establishing backstories for them, each character felt real and sympathetic. I usually try to give a best actor award to someone in the movie, but I can’t this time. Each actor made me believe in his or her character, and no one stood out above the others.

As a science-fiction horror film, Life falls into the same genre as Alien (1979), and comparisons between the two films are obvious and inevitable. Alien is so great and influential that several movies owe a debt to it, and Life joins that list. But Life is no mere ripoff of Alien; it’s a movie that deserves to be judged for its own originality and creativity. The plot is the same: We discover alien life; alien life kills us. And there are similarities between Ripley in Alien and Miranda North in Life. The setting, however, makes the difference. It was pure genius to set the action on the ISS, a location we’re familiar with if only from watching Chris Hatfield sing “Space Oddity.” A location that orbits Earth! No longer is the alien threat light years away in a future still a hundred years away. For all we know, the events of Life could be playing out now, this moment, on the manned satellite only 250 miles overhead.

Life also takes advantage of the inherent claustrophobia of space travel. One problem I have with almost every space adventure, be it Alien, Star Trek, Star Wars, or whatever, is how much wasted space there is on the space ships. The space vessels that actually exist are compact and cramp vehicles. They’re designed to be no bigger than necessary and then shrunk down from there. Every inch has to serve double, even triple purposes. Life captures this reality and uses it to heighten tension and danger. If the tag line for Alien was In Space No One Can Hear You Scream, the tag line for Life could be No Where to Run, No Where to Hide.

The special effects were awesome. At no time did I doubt they were in zero gravity. And I loved the design of Calvin. More than the xenomorph in the Alien franchise, this monster feels exactly like what we are likely to encounter in the search for extraterrestrial life. Though I rolled my eyes at the idea that every cell is nothing but muscle and brain, I never doubted Calvin’s destructive hostility.

Grounding it in the here and now, in the familiar, is Life’s greatest strength. It gives an immediacy to the threat that does not exist in other science-fiction horror movies. It feels more realistic. Life delivers on the promises it makes. It’s a tense, scary, realistic movie. Though the plot was predictable, it was filled with surprising thrills and chills. And it answers the question: Why would extraterrestrial life come to Earth?

Because we searched for it, found it, and brought it here ourselves.