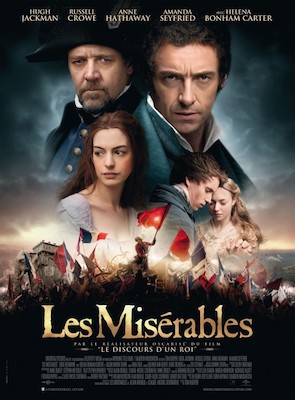 If I were grading Les Misérables (2012) like a term paper, I would be tempted to give it a C+ or a B-. If we assume C means average and B means good, this grade implies it’s better than average but less than good. It is an entertaining movie, worth seeing—especially if you’re in the mood, as I sometimes find myself in, for a musical—but it doesn’t make my must-watch list. It even falls short of my favorites. In fact, I’ve seen it only twice. The first time was in 2012 when it hit the theaters. I bought my ticket, my popcorn, my soda; I found my seat and watched the show. I left the theater thinking: That was good, but… My second watching was last week, when I bought it on AppleTV. After a steak dinner and a couple glasses of wine, I broke down and decided to see Les Misérables again. I poured another glass of wine and watched it. I thought: That was entertaining, and I’m glad I now own it, but…

Ah yes, that petty little but!

But it’s not Cabaret. It’s not Evita. It’s not Jesus Christ Superstar. There are several moments in each of these musicals that keep me coming back to them, over and over and over again. There is a scene in Cabaret when a youth with a angelic face and voice sings a beautiful song a cappella. But then the camera pulls back and you see the swastika on his arm. The song that a minute earlier had sounded beautiful and idyllic now sounds sinister. And later in the same movie, when Liza Minnelli—one of the great voices of my lifetime—sings the title song, “Cabaret,” and you realize just how doomed Sally Bowles is. These scenes never fail to give me goosebumps, no matter how often I see them. It is the purpose of musicals to use song and dance to enhance the drama and pathos inherent in the storyline. The three musicals I name above—and so many more—do just that. Each have three or four deeply emotional moments for me.

Les Misérables has one. 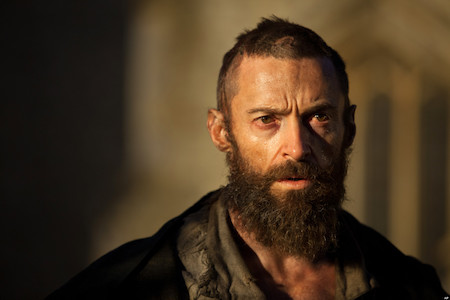 Anne Hathaway plays Fantine. After losing her dignity, after selling her hair and her teeth, after prostituting herself, she sang “I Dreamed a Dream.” I think there are a lot of people hating on Anne Hathaway these days, but I wonder how many of them had seen this scene. I don’t hate on Anne Hathaway, and I never will, because she gave us this Fantine. “I Dreamed a Dream” is the saddest song in a movie filled with sad songs, and Anne Hathaway’s rendition is filled with so much emotion it is impossible not to be moved. It is my one deeply emotional moment for this movie, and I wish the rest of the film approached its quality. There were other beautiful songs, other heart-tugging moments, other moments worth seeing, but nothing else in the film stands out as much as this scene.

Les Misérables began life as a novel by French writer Victor Hugo. Published in 1862, it tells the story about an exconvict, Jean Valjean, as he struggles to live a good life after 19 years of prison and slavery. He met a dying prostitute, Fantine, who tells him of a daughter she had to foster out to cruel guardians. He promised to look after the girl, Cosette, and to raise her as his own child. But as he fulfills this promise, he finds himself pursued by Inspector Javert, a policeman who seeks Valjean for breaking parole. Les Misérables is a long novel, so long that many English-language editions abridge it. Even in the abridge editions, it’s a longer novel than many readers are wont to read. I confess to having never read it myself. What I know about it I’ve learned via research and watching this film.

Composer Claude-Michel Schönberg and French songwriter Alain Boublil adapted the novel into a stage musical, which opened in Paris in 1980. Herbert Kretzmer wrote the English lyrics. Les Misérables opened in London’s West End in 1985 and had played every since, becoming the world’s second longest running musical. The original Broadway production ran from 1987 to 2003, and it’s second ran from 2006 to 2008. Though there was a 1998 film adaptation of the novel—starring Liam Neeson—and though there had been several attempts to bring the musical to film, this 2012 Tom Hooper movie is the first film adaptation of the musical. 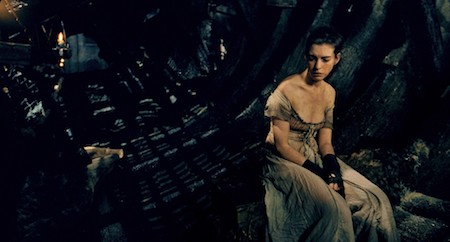 Along with Anne Hathaway, who won Best Supporting Actress for her role as Fantine, Hugh Jackman stars as Valjean and Russell Crowe as Javert. Amanda Seyfried plays the grown-up Cosette, and Eddie Redmayne plays her love interest, Marius. Usually in musicals, the soundtrack is recorded prior to filming, but Hooper took the unusual risk to film the movie and the soundtrack concurrently. The risk played off, giving an emotional richness, an urgency, to the songs that would not have existed without it. Most of the performers adapted well to this challenge. The exception is Russell Crowe, who looks stiff and uncomfortable throughout the film, like someone at a party who realizes he’s the only one without a date.

Danny Cohen handled the cinematography, and this is one of those films where the cinematographer deserves his own bow. Every shot look so beautiful and compelling that—next to Fantine’s song—the photography is the best reason to see the film. Eve Stewart handled the production design. I don’t usually mention the production designer in my reviews, but I think it’s warranted here, because Stewart and her team recreated 19th Century Paris with realistic sets and costumes. There were a few sets and costumes that looked “stagy,” but for the most part, the work felt grounded in the world I know.

You don’t need three years of French to translate Les Misérables into English. It means exactly what it looks like. This is a long movie with dark themes and a dark mood. Most of the songs are sad, even depressing. The plot is depressing. It tells a bleak story about those living at the bottom of society, of paupers exploited by tycoons, of the weak hunted by the powerful. It tells of a failed revolution, the June Rebellion. But it is also a story of redemption. We follow Valjean for twenty years, from his parole to his death, as he struggled to make up for his past crimes, raise Cosette, and stay clear of Javert.

In my grading this as C+ or B-, I must confess that I recognize the ambition of this movie. The Signet Classics paperback edition of Les Misérables is 1,488 pages, but somehow Tom Hooper and the other filmmakers managed to condense that into a 3-hour show. They did this without losing the heart of the story, without cheating any characters of development, and without butchering the plot into an incoherent montage. The film had great ambition; I wish it came closer to fulfilling those ambitions. At the same time, I think this is a movie to grow into; I think I’ll like it better with each viewing. If you like musicals, you’ll want to see Les Misérables. I think it will also appeal to those who like period pieces. All others viewers can skip this movie without consequence. 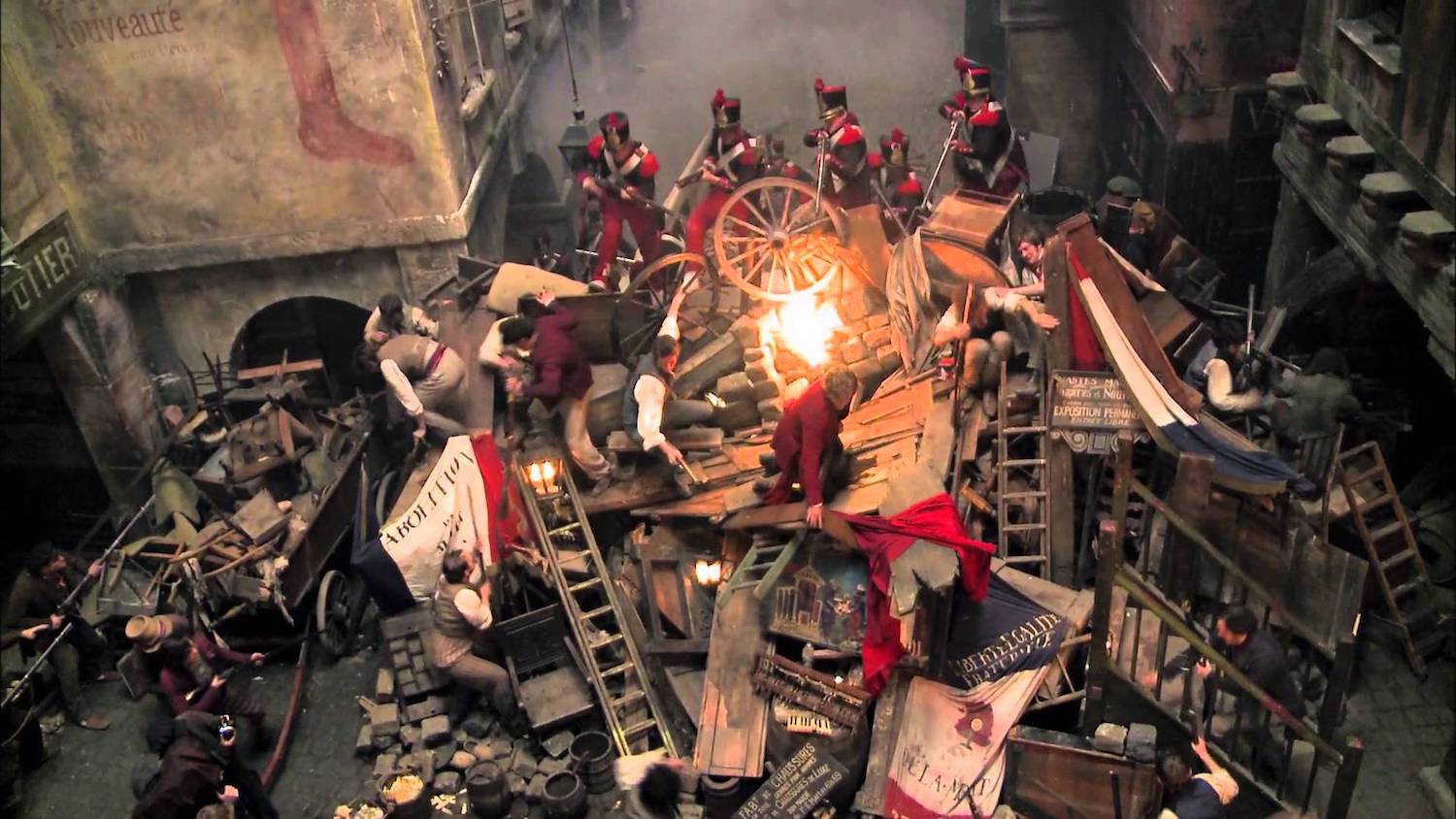