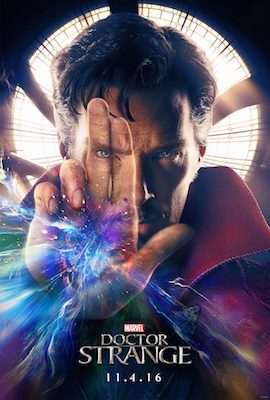 If you follow my blog posts, you know I have mixed feelings over superhero movies, especially as adapted by Marvel Cinematic Universe. If you are unaware of these mixed feelings, I wrote a rant about them a few months ago that you might want to read. Though I find them fun, entertaining movies—great popcorn flicks—I resent that MCU expects me to see every movie they produce in order to understand what’s happening in any of them. Since I don’t see every movie, I often feel lost in the movies I do see. A good example happened in Captain America: Civil War. Since I never saw Winter Soldier, I felt confused by the relationship between Bucky and Steve Rogers.

I’m also feeling saturated with superheroes. Not only are the superheroes of my youth well represented in film these days—some in two or three reboots—but it seems there are a dozen or so who became popular since my childhood. Thanks to MCU, each have their own movie or television series. It’s hard to keep up with, especially with all these interwoven plots that Marvels wants to pursue.

Despite these objections, I felt excited to see Doctor Strange. When I saw that Benedict Cumberbatch would play the title character, I knew I wanted to see it. I admired Cumberbatch as Sherlock Holmes in the BBC series Sherlock and as Khan in Star Trek: Into Darkness. I decided he’s an actor whose career I wanted to follow. With Mads Mikkelsen, who had played Le Chiffre in Casino Royale, as the antagonist Kaecilius, I anticipated a powerful and entertaining clash.

Doctor Strange didn’t disappoint. It proved to be exactly what I anticipated: a fun superhero movie. As such, it shares what is praiseworthy about all superhero movies, and it shares the flaws of such movies. As another entry in MCU, it had its obligatory mention of the Avengers and its obligatory Stan Lee cameo. During both, I rolled my eyes and signed. I can forgive the mention of the Avengers, since the Ancient One (Tilda Swinton) used it as a means of contrasting the threats she and her organization battle with the threats the Avengers battle. It was subtle and it flowed. But really, Stan Lee, give it a rest. These repeated cameos do not help tell the story; they break us out of the story. 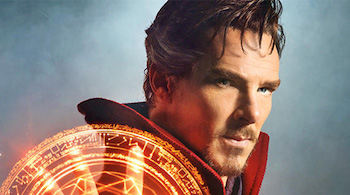 The story, as the first movie of all superheroes tend to be, is an origin story that tells how Dr. Stephen Strange, a talented neurosurgeon in New York became Doctor Strange, a superhero with magical powers who protect mankind from mystical threats. Following a car accident that ruined his hands, Strange searched for a cure. When conventional medicine and physical therapy failed him, he traveled to a strange land to seek a mystical cure. There he encountered the Ancient One and her army of mystics. He joined in order to gain control of his hands, but when he learned there was a war brewing between this society and Kaecilius, who hoped to summon a powerful evil, Strange found himself a reluctant but capable soldier in that war. Superhero violence ensured. And in the course of the movie, Doctor Strange learned his life could have meaning outside of medicine. 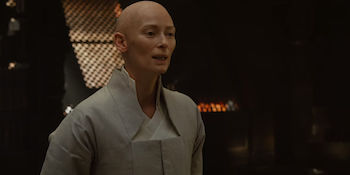 Tilda Swinton as the Ancient One

I found parts of Doctor Strange derivative of other superhero movies. The quest, for example, in the strange land reminded me of Batman Begins, and Dr. Strange’s arrogance and selfishness reminded me of Tony Stark. Despite these similarities, Doctor Strange is a unique approach to the superhero genre, because instead of strength or other exterior power, his powers come from the mind and from the mystical arts. This inspires a different type of villain, and it forces a different type of battle. It is a movie laden with special effects, heavy in CGI, and there are some WTF moments. The CGI was well done, it flowed seamlessly with the photography, and only once did I feel it was overhanded. Unfortunately, that one time was the climatic scene of the movie. Though interesting, it wasn’t visually pleasing. In truth, that segment felt derivative of—dare I say it—Parallax of Green Lantern. That comparison is misleading, because Green Lantern is a horrible movie while Doctor Strange is a good one. But it is fair to say the climax of Doctor Strange relied too much on CGI.

Directed by Scott Derrickson, who cowrote the screenplay with Jon Spaihts and C. Roger Cargill, Doctor Strange is a fun superhero film that’s well wroth seeing. I saw it in 2D, but another reviewer I follow, suggested seeing it in 3D. Though I usually don’t believe 3D is worth the extra price, this movie, with its visual effects, might benefit from that extra dimension. I know I find myself wanting to see it a second time, this time in 3D. In fact, I believe I will.