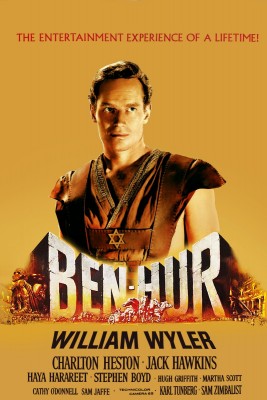 This coming week will see the remake of Ben-Hur, the 1959 classic movie of revenge and redemption. Naturally, I’m curious of the remake, but I’m also wary. I want it to be good, but it seems doubtful that it could be Charlton Heston good. In anticipation of the remake, I read the original book by Lew Wallace, and reviewed it last Wednesday. This last Sunday, I set aside the evening and watched—for the fourth or fifth time in my life—Ben Hur: A Tale of Christ. I needed the evening, because at three-and-a-half hours long, it required it. Ben-Hur is an epic movie. Epic not only describes its genre, but also it describes the scope of this production. It took years to build the sets and to collect the million props needed. It took several rewrites of the screenplay and the efforts of fame novelist Gore Vidal (uncredited) and others to adapt Lew Wallace’s novel into film. It took legendary actor Charlton Heston. And it took a director, William Wyler, who felt inferior to the project. It took $15,000,000 (about $124 million now). Was it worth it?

William Wyler directed Ben-Hur. Prior to this project, he was best known for simpler movies like Roman Holiday (1953) and The Westerners (1940). He feared Ben-Hur was too ambitious for his skills, especially the chariot race. But he rose to the task. He hated the screenplay by Karl Tunberg, the credited writer, so he asked Vidal and Maxwell Anderson to rewrite it. Their work on this project went uncredited. Charlton Heston played Ben-Hur. Opposite him, Stephen Boyd starred as Messala. The supporting cast included Jack Hawkins, Hugh Griffith, and Finlay Currie, as Quintus Arrius, Sheik Ilderim, and Balthasar, respectively. Israeli actress Haya Harareet starred as Esther, Ben-Hur’s love interest.

Ben-Hur tells the story of Judah Ben-Hur, a prince of Judea, and his rivalry with the Roman Messala. They grew up friends, but now politics separated them. After years in Rome, Messala returned to Jerusalem as the commander of the garrison. He planned to squelch a fledging rebellion before it erupts into full-scale war. To that end, he asked Ben-Hur to give him names of rebel leaders. When Ben-Hur refused, the former friends parted bitter rivals. When an accident a few days later falsely implicated Ben-Hur in an assassination attempt, Messala condemned Ben-Hur to life of slavery as a rower in a war ship. He also arrested Ben-Hur’s mother and sister and sent them to an unknown fate. After this injustice, Ben-Hur sought revenge. He also sought to reunite his family and restore their good position in Jerusalem. 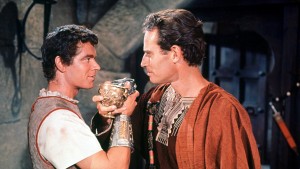 My review of the novel was mixed. Though I praised it for having several entertaining scenes and descriptions, I feared it suffered structural problems. Too often, the characters engaged in long Platonic dialogues about the nature of the Messiah. And the biggest scene, the chariot race, the showdown between Ben-Hur and Messala happened in the middle of the novel, making what followed anticlimactic. The movie corrected the first problem by cutting those Platonic dialogues. It trusted the story itself to reveal the nature of Jesus and his importance to this world and these characters. And it corrected the second problem by placing the chariot race closer to the end of the movie. By giving Ben-Hur and Messala more scenes, they allowed for the build-up to the showdown, the building to tension and conflict that we expect from modern movies.

One wife? One god, that I can understand—but one wife! That is not civilized.

That chariot race is the most memorable scene in the movie. Though I’ve seen it several times, it never fails to impress. The truth of the matter is: They don’t film like this anymore. They built the entire arena, covering an area of 18 acres. They brought in five dozen horses, built the chariots, and trained the actors and stuntmen how to race them. They took five weeks to film the chariot race, and most of the footage ended up on the cutting room floor. The footage that remains is brutal. We see Heston’s stunt double, Joe Canutt, thrown over the chariot, and we watch Boyd dragged behind his horses. A metal sled protected his body, but he still suffered permanent scars. The chariot race looks real, because it was real. I give nothing away by telling you these details, because nothing can prepare you for the spectacle of the race. 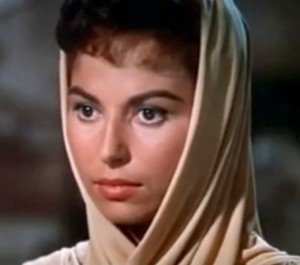 Though the race is the most praiseworthy and ambitious element in the movie, it is far from the only excellent thing in Ben-Hur. The acting was good, though at times I feared Heston recited his lines with too much melodrama. I particularly liked Griffith as Ildirim. The photography was excellent, especially during the chariot race. But next to that race, my favorite element was the setting. They built a miniature Jerusalem on a ten-block area, and this immersed me in the time and place. It gave a tactual feel to the movie that can’t be achieved with modern green screen.

Ben-Hur is not perfect. Despite Vidal and Anderson’s efforts, the screenplay still felt rough. Some of the extra costumes looked flimsy, but I supposed that’s to be expected since they had 18,000 extras. My biggest complaint with the movie is the depiction of Jesus. Claude Heater, an opera singer, played Jesus Christ, but they never credited him for the role. The filmmakers made the decision that Jesus would have no dialogue in the movie. Fair enough, but they also made a decision not to show his face. They achieved this with awkward camera angles and distant shots. But in one shot, where his face did appear, it looks like they had blacked it out with a felt marker. It was horrible and disconcerting.

The race, the race is not over.

Ben-Hur was both financially successful and critical praised. It won eleven Oscars, including best actor, best director, and best picture. Miklós Rózsa won for the best musical scoring. It had made several lists of movies you must-see before you die. If for no other reason, see Ben-Hur: A Tale of Christ for the chariot race. 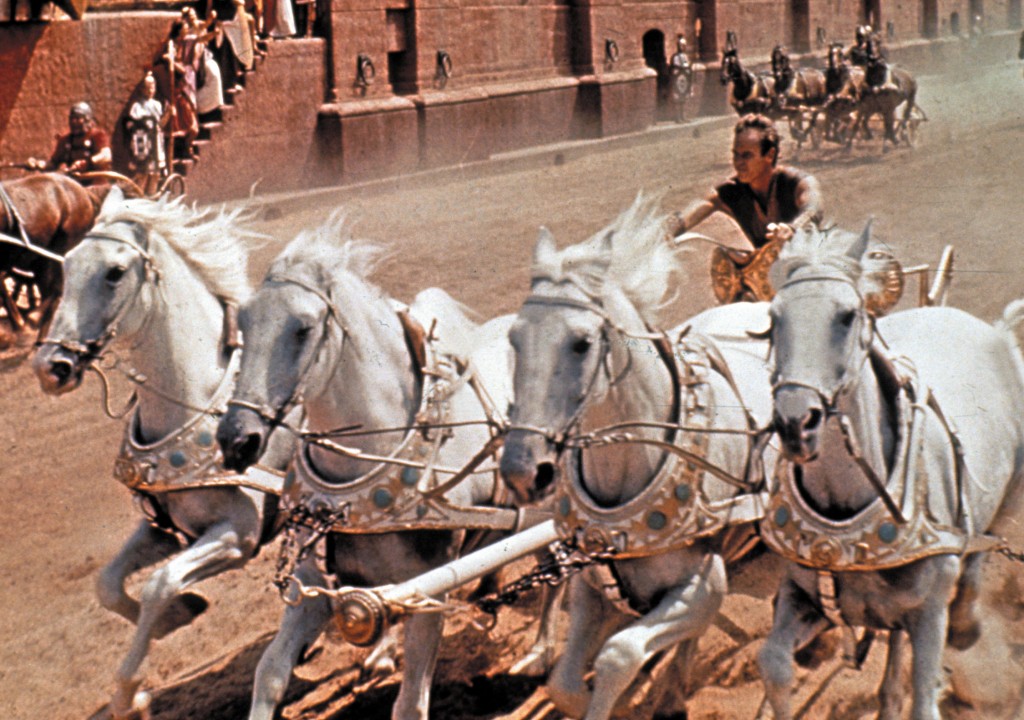