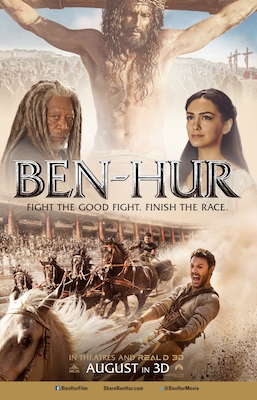 A couple weeks ago, I review Ben-Hur: A Tale of Christ, the 1880 novel by Lew Wallace, and last week, I review the 1959 movie starring Charlton Heston. This was in preparation to this year’s remake, starring Jack Huston and Toby Kebbell. I anticipated this movie with tempered excitement, because most Hollywood remakes are less satisfying than the original. But I found myself hopeful, because one movie isn’t necessary better than another because it was made in 1959 with Charlton Heston. Somehow I never saw a trailer for the movie, but the promotional products I did see—stills and teasers—looked promising. Though I never expected it to be as good as the 1959 movie, I expected it would be entertaining and worth seeing.

But as I waited in the theater for the movie to start, I grew worried. Too few people in the audience. Due to my schedule, the best time for me to see a movie is Saturday morning. That’s not a popular time for movie-going, so the audiences tend to be small. But they are rarely so small I can count everyone on my fingers. What do those staying away know that I don’t know? The movie started. Five minutes in, I thought: I already hate it! But that proved to be a premature judgement. In terms of plot, the beginning  was its weakest moment. Ben-Hur got better as it played, and my final judgement is that it is entertaining and worth seeing, but it is not destined to usurp the Charlton Heston version in grandeur or popularity.

Timur Bekmambetov directed Ben-Hur. I don’t know much about this director. The only film of his I saw was the 2008’s Wanted, starring Angelina Jolie and James McAvoy. That movie was okay, but I never felt tempted to see it again. Jack Huston, from the Twilight movies, starred as Ben-Hur, and Toby Kebbell starred as Messala. Morgan Freeman was Ilderim. Ayelet Zurer and Sofia Black-D’Elis played Ben-Hur’s mother and sister, respectively. Nazanin Boniadi played Esther, his love interest. Other important actors was Pilou Asbaek as Pontius Pilate and Rodrigo Santoro as Jesus.

I give Kebbell the award for best performance. His Messala is deeper, more troubled, and more interesting than the Messala we meet in the novel or in the 1959 movie. In terms of what they changed, that was the best change. This allowed for more conflict between Messala and Ben-Hur and a better understanding of the rivalry between them. But I dislike the mechanism of the change, which was to make Messala an adopted brother of Ben-Hur. Since that was never in the original source, it felt shoehorned in. And it felt false. When I was thinking I hated this version, it was this change that I was reacting to.

The fully developed Messala allowed for a plot that was better structured than the novel or the 1959 movie. By that I mean that the climax—the showdown between Ben-Hur and Messala—happened where we expect it to happen—at the end of the movie. I bemoaned the structure of the novel, where the showdown happened towards the middle of the book, and even the 1959 movie had a longer denouement than modern filmgoers want. Though this screenplay—written by Keith R. Clarke and John Ridley—fixes the structure, the execution was far from satisfying. The denouement felt rushed and clumsy. It felt Hollywood! You know what I mean: That false scene at the end of the movie when all the characters—despite the hardship they had suffered—hug and laugh and feel good.

Now that I had seen the structured “fixed,” I realized it was never broken. Though it is the conflict that interests us, the rivalry between Ben-Hur and Messala was only a part of Ben-Hur’s character arc. It was a subplot in a greater plot that focused on redemption. That long denouement in the novel and the 1959 movie carried Ben-Hur from his blood-lust revenge to faith in Christ. To me, that phase of the story always felt anticlimactic, but since this was a Christian story, it’s an inherent part of Ben-Hur’s journey. In this version, his transformation from hatred to forgiveness, his redemption, felt false. It felt unearned. It felt as misplaced as a footnote: By the way, Ben-Hur witnessed the crucification of Christ and became one of the first Christians.

This hints at my biggest criticism of Ben-Hur. Ben-Hur is a character story, but this film filmed it as an action movie. The action set-pieces were exciting and fun to watch. I prefer the sea battle in this version to the 1959 movie. While writing about the chariot race in Heston’s movie, I wrote that they don’t film this way anymore. And I was right. Though there were several crashes and other thrills in the chariot race, it lacked the intensity of the earlier film. The green screen effects were poorly done, jarring me out of the scene. But the other effects were believable and made for a fun scene. A fun scene, yes, but compared to the chariot race in Heston’s movie…well, no comparison, really.

The acting was not memorable. As I said, Kebbell provided us with the best performance. This was the first movie I’ve seen with Huston. Maybe he can act, but he chose not to do so in Ben-Hur. Maybe the problem lie with changes they made in the character. They made several character changes in this version, cutting some characters while truncating the role of others. Many were necessary changes to tighten the plot, but others hurt the plot and rob the story of its emotional value. Esther seems nothing but a pretty face for Ben-Hur to kiss.  And they changed Ilderim from an Arab to an African. Why? Was it because they casted Freeman in the role? Or was it because of the current distrust Americans have about Arabs? Either way, it’s unfortunate, because Ilderim as presented in the novel and in the 1959 movie was a positive Arab figure for us to like and cheer.

Despite the complaints I have about Ben-Hur, I left the theater glad I had seen it. I got my money’s worth. One advantage of seeing movies on Saturday morning is that the tickets are discounted. That’s my recommendation. If you feel tempted to see Ben-Hur, see it at a discount showing.