Jay Gatsby and the Green Light 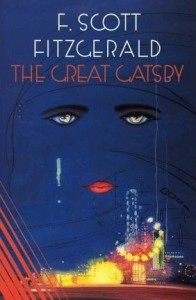 Everyone is reading The Great Gatsby now!

Kobo had announced that sales of this novel has increased by 250% worldwide. Amazon has been selling its Kindle edition for $4.99, and at that price, it has been their best seller for over a hundred days. Though Barnes and Noble has not met that price for their Nook edition, its trade paperback edition is their top seller in that category. My niece had posted on Facebook that the library copies are not only checked out, but also have a waiting list. I had lent a friend my paperback copy, and, in anticipation for the movie release, I had reread The Great Gatsby on my Kindle. Though I have no statistics to support this speculation, I suspect that during the last two months, more people have read that book than at any other two-month period of its history. Though I’m happy for this renewed interest in one of my favorite novels, I regret—perhaps even resent—that it took a major Hollywood release to ignite it.

The book itself is worth loving!

Though he had written only four complete novels (he died before finishing The Last Tycoon), F. Scott Fitzgerald (1896-1940) is one of the principle voices of the Lost Generation, those American writers who came to prominence after World War I. Most scholars agree that The Great Gatsby is his most important work. Whenever I hear the phrase The Great American Novel, my thoughts turn immediately to The Great Gatsby. Why? Why not Hemingway’s The Sun Also Rises or Steinbeck’s The Grapes of Wrath or Twain’s The Adventures of Huckleberry Finn? No doubt there are dozens of novels worthy of the title, perhaps hundreds, arguably thousands. So why Gatsby?

It is a short novel with a very simple plot. Nick Carraway, the narrator, is a young man who moved from the Midwest to New York in order to establish a career and to escape a romantic misunderstanding. (The novel is ridden with romantic misunderstandings.) He rented a modest home on Long Island, next to Gatsby’s mansion, and he visited his second cousin, Daisy Buchanan, and her husband, Tom. He didn’t know it, but he was poised to witness a small drama that was about to unfold between Gatsby and the Buchanans. Though the plot is simple, it is also compelling. Yet the driving force behind this novel, the reason readers keep turning its pages, is the mystery surrounding Jay Gatsby. Who is he? Why does he hosts such big parties? Where did he get his money? And why does he stand alone at night, at the water’s edge, and stare across the bay at the green light at the end of a private dock?

I am Jay Gatsby!

A desire to find characters we relate to is one reason we read novels. It is easy to identify with Gatsby, because he is—well—so typically American. He chases the American Dream, this promise (broken promise for so many of us) that we can start a nobody from nowhere with nothing and end up a socialite living in a million-dollar house on Long Island. At least that was the fulfillment of the Dream for Gatsby. Each of us would phrase the Dream differently, but as Americans, we worship it as a religion. Perhaps it is our true religion—and Gatsby, our sainted martyr.

At least this is what I pulled from this reading of The Great Gatsby—my fifth reading. A tell of a great novel is that with each reading, you see something new, something fresh, something different. This is why I keep coming back to this novel, to rediscover it. For anyone who wishes to be versed in American Literature, this is a must read, but I recommend it to everyone. It is a great novel!