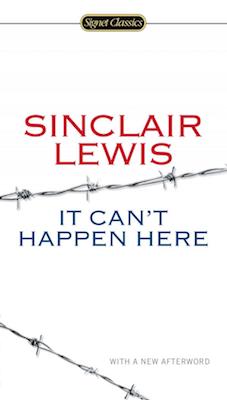 History remembers the presidential election of 1936 as a pivotal moment for the United States and for its democracy. That year, Berzelius “Buzz” Windrip captured the Democratic Party with his populist promise of $5,000 to every citizen, financed by raiding the vast fortunes of the very rich. In response to losing the nomination, incumbent Franklin Delano Roosevelt founded his own third party. Along with the Republican candidate, Senator Walt Trowbridge, Roosevelt campaigned fiercely against Windrip and his un-American agenda, but the momentum was with the upstart. An unlikely Electoral College victory put him in the White House, and America fell into that dark period known as Corpoism.

At least, that’s the version of the 1936 election described in Sinclair Lewis’ dystopian novel, It Can’t Happen Here. I’ve known about this novel for decades, and for decades I’ve avoided reading it. I had no interest to read it. Like The Man in High Castle by Philip K. Dick, I thought It Can’t Happen Here was an alternative history novel, and that’s a sub-genre I’m not interested in. Though I love historical novels, alternative history fiction seems a bad idea. Isn’t history dire enough without darker alternatives? But I was wrong. It Can’t Happen Here, published in 1935, wasn’t alternative history; it was a projection of what could happen during the next election year if an Hitler-like politician rose to power in America. Lewis wasn’t rewriting history; he was answering the fiction writer’s favorite question: What if… In this case: What if a fascist won the presidency?

If I didn’t decide to survey dystopian fiction, I probably would’ve never read It Can’t Happen Here. I began this survey—without knowing I was beginning a survey—back in March of 2012, but it has been a haphazard endeavor. It’s a theme I’m interested it, but not one that I read often. But with the election of Donald Trump, I made the decision to pursue this theme with more vigor. Since I believe my political opinions are irrelevant to literary review, I don’t often get political in this blog. But it’s hard to read It Can’t Happen Here—at least the campaign portion—without thinking about Donald Trump. If Trump isn’t Windrip incarnate, he’s close enough to turn Lewis’ cautionary novel into an unsettling foreshadow.

The similarities between Trump and Windrip are striking. Both ran on a populist platform that tailored its message to “the forgotten man.” Both promised jobs and a restoration of America’s greatness. Though both men needed democracy to rise to power, neither had faith in our democratic institutions. Both men used racism to rally the fringe voters to their cause. And both hosted large, wild, and well-publicized rallies, where the candidate “spoke from the heart” and “told it like it is.”

When he headed toward Madison Square Garden and the culminating Windrip rally, he was plunged into a maelstrom. A whole nation seemed querulously to be heading the same way. He could not get a taxicab, and walking through the dreary storm some fourteen blocks to Madison Square Garden he was aware of the murderous temper of the crowd.

Reading the first third of It Can’t Happen Here felt like reliving the 2016 presidential campaign. It detailed the rallies, the momentum, the rise of Buzz Windrip from being a peripheral political figure to become the President of the United States. Our point-of-view in this rise is Doremus Jessup, the sixty-year-old owner and editor of a small New England newspaper,  The Informer. He’s a Roosevelt Democrat who sees through Windrip’s populist facade to the fascist beneath. He’s a family man whose children had grown up and began their adult lives, except for Sissy, his youngest daughter, who still lives at home and is finishing high school. Though Jessup’s married to a loyal woman, he has a mistress, Lorinda Pike, who runs the local tea house and inn. She’s an independent woman in a world that distrusts and resents feminine independence. Though Jessup loves his wife, he feels more “at home” with Lorinda.

For that first part of the novel, the campaign portion, Jessup feels more like an observer than a protagonist. Only after Windrip wins the presidency does Jessup become the protagonist, as he takes steps to resist and undermine Windrip’s fascist agenda. This puts him in conflict with the local Corpoists, include Shad Ledue, a former employee of Jessup who, due to his loyalty to Windrip, became the district commissioner.  With Ledue, Lewis gave Windrip’s antagonism a local presence. Resentful of Jessup, Ledue seeks to influence him, control him, and, finally, to punish him. In this Lewis introduces us to an United States of America infused with loyalty oaths, kangaroo courts, summary executions, and concentrations camps.

Not till they had almost reached the courthouse could he realize that people were looking at him—at Doremus Jessup!—as a prisoner being taken to jail. He tried to be proud of being a political prisoner. He couldn’t. Jail was jail.

Born in 1885 in Sauk Centre, Minnesota, Harry Sinclair Lewis grew up in the midwest. He attended Yale University, where he edited the campus literary journal. After college, he spent his early career moving around the country and working as a journalist at various newspapers, until the publication of his first literary novel, Our Mr. Wrenn, in 1914. Six years later, with the publication of Main Street, he secured his literary legacy. Main Street made him a wealthy man. He followed it up in 1922 with Babbitt and in 1925 with Arrowsmith. He won the Pulitzer Prize for Arrowsmith, but he declined it. He believed the Pulitzer should celebrate America culture, and he recognized that his writing was too loaded with social commentary for that purpose. But in 1930, he became the first America to win the Nobel Prize for Literature. That accolade he accepted. Of his later novels, It Can’t Happen Here stands of the most important. Lewis spent the last phase of his life touring Europe, until his health deteriorated too much to travel. He died in Rome in 1951. 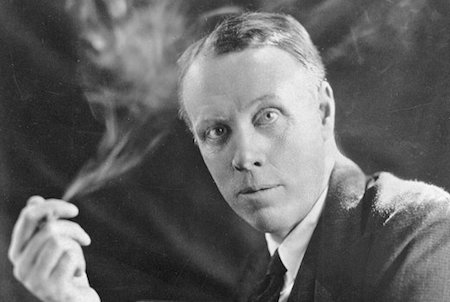 Dystopia fiction concerns societies where those in power—usually the government—has become hostile and oppressive to the population they oversee. In a healthy society, government serves the people; in a dystopian society, the people serve the government. In It Can’t Happen Here, Lewis shows us how that might look in the United States. After winning the presidency, Windrip consolidated his power with the help of his most loyal followers, who formed a paramilitary force known as Minute Men. The Minute Men helped Windrip disband Congress and silence resistance. But Windrip’s government is full of distrust, infighting, and double-cross. It would eventually implode with a series of coups, while the resistance, called the New Underground, undermined its fascist agenda. So in his bleak prediction of America’s future, Lewis gave us, if not hope, a vision of recovery.

Though I compared the election of Windrip to the election of Trump, it is unfair to compare their governments. Trump has not disbanded Congress or instituted a party army to deal with dissenters. Unlike Windrip, Trump is not a fascist. He’s an oligarch. He believes the wealthiest citizens should rule. There’s evidence of this in the formation of his Cabinet, in the policies he proposes or institute via executive order, and in his statements about himself. Does that make his government less dystopian? There are no kangaroo courts, summary execution, or concentration camps.

But he has attacked the free press, labeled journalist the enemy of the people, and called for a “war” against the media. In West Virginia, a journalist was arrested for asking Tom Price a question about the House healthcare bill. In Montana, Republican Greg Gianforte body slammed Guardian reporter Ben Jacobs. Though Trump hadn’t formed a party paramilitary force, an Oregon Republican official, James Buchal, has called for using right-wing militias to “protect” Republicans. That sounds like Windrip’s Minute Men to me! Trump has started a round-up of immigrants, and he has tried, not once but twice, to ban Muslims from entering the United States. He wants to spend billions on building a wall, and he has called for an increase in military spending, while his budget cuts programs that help the poorest citizens buy food and pay for housing. A faithful execution of his vision for the United States would turn America into a dystopia.

In It Can’t Happen Here, Sinclair Lewis wrote about the fall of America’s Constitutional democracy. Since Hitler ruled over Germany and Mussolini ruled over Italy, fascism was the threat Lewis feared. So it was the threat he wrote about. We live in a time where fascism is no longer the greatest threat to democracy, but that doesn’t make Lewis’ novel less prescient. Lewis understood that the greatest threat to American democracy doesn’t lie outside our boarder but within it. He foresaw how a cunning candidate could exploit income inequality, racism, xenophobia, economic woes, and political discord to win the White House. And he knew that such a candidate could incite his followers to destroy our democratic institutions. In 1984, George Orwell showed us what living in a dystopia would be like, but in It Can’t Happen Here, Sinclair Lewis showed us how a free society could fall into that dystopia.