Into the Forest by Jean Hegland 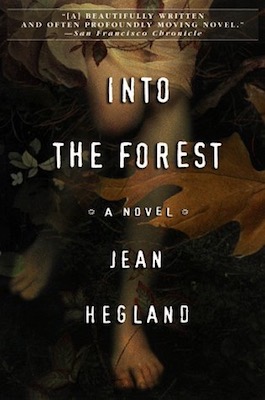 My home shares the same power grid as the county courthouse and jail, so when it goes out, it’s high priority to restore it. The power doesn’t go out often, but when it does, I find myself in a surrealistic confusion. What now? Since my computer’s down, I can’t write, so I decide to watch television. Nope! Can’t do that either. I’ll cook dinner. What a great idea, until I walk into my kitchen and see my electric stove. Three or four activities will pass through my mind—play a computer game, browse the internet, listen to music—before I realize everything I do requires electricity. Even reading a classic novel requires a lamp. I feel stranded. I feel cut off from the world. I need to know what’s happening and when the power will be restored, but to learn these things requires electricity to run the internet or the radio. I won’t say I suffer a panic attack, because that’s would by hyperbolic, but I will say that I feel disorientated, lost, and worried.

Into the Forests posits a future where the power shuts down forever. Set in the California redwood forests, it tells of two sisters, Eva and Nell, who must face this new reality, a reality made more tragic by the lost of their parents. They are young women, planning lives for themselves—ballet dancing for Eva, Harvard for Nell—lives they expect to resume once the power comes back on. But will it ever be restored? And what happens if it isn’t? This is an apocalyptic tale, told not in the broad scale of what’s happening in the world—as we tend to experience apocalyptic stories—but in the narrow vision of what’s happening to two sisters. We follow them as they relearn what society had forgotten.

Because the arc of civilization begins with mankind as hunter-gatherers, proceeds through agriculture, and into the modern world dominated by electricity and the internal combustion engine. Into the Forest reverses this arc, taking Eva and Nell back to agriculture and to our hunter-gatherer roots. That was the most enjoyable part of the novel to me. I loved watching—isn’t reading a way to watch—as they expanded their knowledge and skills into activities they had disdained prior to the apocalypse. I loved watching them learn how to farm, how to find and use local herbs and wild fruit, and how to hunt. At it’s heart, this is a novel about survival, but it is also a novel about self-actualization and finding that inner strength.

Nell acts as the first-person narrator in Into the Forest. She records their experiences in her journal, making this novel an epistolary novel. Talking about disdain, I have always felt disdain for this format, but despite that, most of the last few novels I’ve read and review in this blog are epistolary. It’s a format that has glaring weaknesses, but in the right hands, it also has strengths. Jean Hegland has the right hands. Into the Forest never lagged or felt distant like other epistolary novels. Instead, it gave us an intimate look at the thoughts, feelings, and experiences of Nell. It also felt very realistic. This is exactly what would happen if the power went out for good.

Published in 1998, Into the Forest is Jean Hegland’s first novel. Hegland grew up in Pullman, Washington, where her father taught English at Washington State University. She started college at Fairhaven College in Bellingham, Washington, and she graduated from Western Washington University in 1979. Strange to say, my path might’ve crossed hers, because I also was a student at WWU in 1979. Since I was a freshman when she was a senior, we never met, but I enjoy entertaining the possibility. Along with Into the Forest, Hegland has published two more novels: Windfalls (2004) and Still Time (2015).

I discovered this novel backwards. Browsing my streaming services for a movie one night, I discovered the movie adaptation and watched it. I liked the movie enough that I decided to read the book. Though they both told the same story—the movie was very faithful to the novel—I’m glad I read the book. Into the Forest is a novel well worth reading. In Eva and Nell, it gives us two characters easy to care about and root for. It gives us an exciting plot, filled with conflicts against both nature and man. It tells us an apocalyptic story with more intimacy than we tend to have them. Most of all, it tells us what will happen when the lights go out forever.