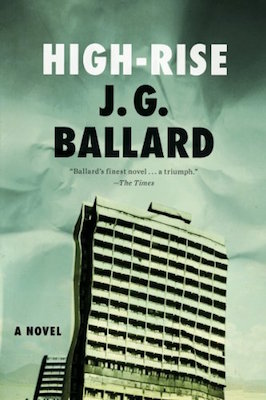 Though I’ve never read J.G. Ballard before, I discovered as I researched his biography that he’s been in my life for a long time. At least since the 80s, when I saw Steven Spielberg’s Empire of the Sun. This movie was an adaptation from Ballard’s book by the same name, which was an autobiographical novel about his childhood in Japanese-occupied Shanghai. I liked the movie, but I remember it made me feel uncomfortable due to the juxtaposition of idyllic childhood with the images of war. His stories and novels had also inspired several popular songs, including “Video Killed the Radio Star” by The Buggles and Madonna’s “Drowned World.”

In 1996, David Cronenberg adapted Ballard’s Crash in to a feature film, a movie that dealt with people who seek sexual fulfillment in car crashes. Filled with disturbing images and populated by disturbed characters, this movie made me feel even more uncomfortable than Empire of the Sun. I left the theater uncertain whether I liked it or not, but I also knew I saw something important, something unique, something innovative. There was genius behind this story, I recognized. A twisted genius, for sure, but a genius nonetheless. At the time, I attributed this genius to Cronenberg, but after reading High-Rise, I realized its foundation lies in Ballard.

James Graham Ballard was born in on November 15, 1930 in Shanghai. As a child, Ballard witness the outbreak of war. When the Japanese captured Shanghai, they sent the Ballard family to in an internment camp. This experience is the subject of Empire of the Sun. After the war, his mother took him back to England, where he lived for the rest of his life. Though he originally studied medicine, he dropped out of medical school to write. He discovered science fiction, and began his career with such novels as The Wind from Nowhere (1961), The Drowned World (1962), and The Burning World (1964). His wife died in 1964. Perhaps this tragedy turned him towards darkness, because his writing became controversial for it dark themes: The Atrocity Exhibition (1970), Crash (1973), and High-Rise (1975). He continued writing until his death in 2009.

Later, as he sat on his balcony eating the dog, Dr. Robert Laing reflected on the unusual events that had taken place within this huge apartment building during the previous three months. Now that everything had returned to normal, he was surprised that there had been no obvious beginning, no point beyond which their lives had moved into a clearly more sinister dimension. With its forty floors and thousand apartments, its supermarket and swimming-pools, bank and junior school–all in effect abandoned in the sky–the high-rise offered more than enough opportunities for violence and confrontation.

High-Rise tells the story of the metaphoric fall of civilization, as the residence of a high-rise apartment building outside London devolved into tribal warfare. (There’s a sentence I’ve never thought I would have to write.) As society is structured between those at the top, those at the bottom, and the vast majority trapped between as the middle-class, so is the stratification of the skyscraper. Ballard tells this story by following the activities of three protagonists. Anthony Royal, the building’s architect, lives and rules like a king in the building penthouse, but his rival, Richard Wilder, who lives on the lower floors, decides to “climb the building.” Meanwhile, Dr. Robert Laing, who lives on the 25th floor, the middle, struggles to maintain stability during the collapse of social structure.

Power outages, malfunctioning elevators, and unpredictable plumbing incite the population of the lower floors to rebel against those who live higher. For Laing, the situation begins when a wine bottle, dropped from a higher floor, shatters across his balcony. But soon after, someone drowns a dog in a pool, and a man falls to his death. Stability dissolves; chaos ensues. Raids, assaults, mass beatings, rapes, and even murders follow. I read one snippet of a review who called High-Rise “hilarious,” but I didn’t find it so. Though the novel had its lighter moments, it was a brutal novel about man’s inherent tribal nature. In the exploration of that theme, it reminds me of William Golding’s Lord of the Flies.

The one discordant note was provided by the fractured picture window on the 40th floor, through which the unfortunate jeweller had made his exit. At either end of the floor were two penthouse apartments, the north corner occupied by Anthony Royal, the other by the jeweller and his wife. The broken pane had not been replaced, and the asterisk of cracked glass reminded Wilder of some kind of cryptic notation, a transfer on the fuselage of a wartime aircraft marking a kill.

High-Rise has been made into a recent motion picture, directed by Ben Wheatley and starring Tom Hiddleston. I plan on seeing the movie and reviewing it during the coming month, but as always, I wanted to read the book first. I’m glad I did, because I found High-Rise to be an exciting and thought-provoking novel that explores such themes as the class structure, mankind’s tribal nature, and the egg-shell-fragility of social order. I highly recommend this book, and I know I will now read other works by J.G. Ballard.