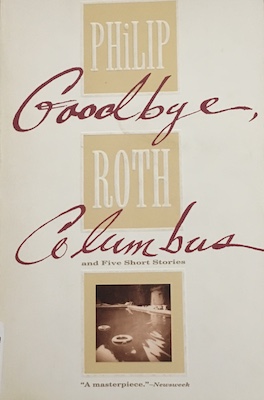 When I read that quotation, my first reaction was: A statement for our times, but also my own personal challenge. As I’ve mentioned in these pages before, though I love reading, I too often find myself distracted by the screen. I watch around three hundred movies a year, and now that television shows are literary, I keep finding new shows to binge watch on Netflix. Too often I waste time watching YouTube videos on my iPad. And I won’t even talk about my addiction to the computer game Civilization. There was a time in my life when I could read a long novel, like East of Eden by John Steinbeck–778 pages in the edition in my library–in a week to ten days, but now I struggled to finish a hundred-page novel in the same time. It’s my personal challenge this year to reconcile with the avid reader I used to be. My current efforts in that challenge is to read several short novels before April 30. Roth’s own Goodbye, Columbus joined the list of those novels.

Philip Roth (1933-2018) is a modern American literary icon. Published in 1959, Goodbye, Columbus elevated him to fame. It won the National Book Award for fiction in 1960. Other novels followed, including When She Was Good (1967), Portnoy’s Complaint (1969), and Sabbath’s Theater (1995). Readers of this blog might remember that I had reviewed his American Pastoral (1997), for which he won the Pulitzer Prize for Fiction in 1998. Like many American writers, he also taught college. He taught at the University of Chicago, University of Iowa, Princeton University, and the University of Pennsylvania, from which he retired in 1991. He died of heart failure on May 22, 2018.

The first time I saw Brenda she asked me to hold her glasses. Then she stepped out to the edge of the diving board and looked foggily into the pool; it could have been drained, myopic Brenda would never have known it. She dove beautifully, and a moment later she was swimming back to the side of the pool, her head of short-clipped auburn hair held up, straight ahead of her, as though it were a rose on a long stem. She glided to the edge and then was beside me. “Thank you,” she said, her eyes watery though not from the water. She extend a hand for her glasses but did not put them on until she turned and headed away. I watched her move off. Her hands suddenly appeared behind her. She caught the bottom of her suit between thumb and index finger and flicked what flesh had been showing back where it belonged. My blood jumped.

Goodbye, Columbus is told in first person narration; Neil Klugman is the narrator and protagonist. Though a boy from a poor Newark neighborhood, his cousin invited him for an afternoon at the country club. There he mingled with those in the higher class, including Brenda Patimkin. Boy meets girl is a common plot device, but it’s also a powerful one, because once boy and girl meet, all bets are off the table. Anything can happen! And since love and sex are fundamental human needs, us readers become immediately curious about the relationship. The thematic question at the heart of Goodbye, Columbus is: Can a girl from the affluent Short Hills neighborhood love a boy from a lower class?

This novel is loaded with local color. I love the way Roth compare-and-contrasts the different neighborhoods. There’s a beautiful paired scenes where Neil describes his Aunt Gladys’ refrigerator and later the refrigerator in the Patkimkins’ basement. The details were wonderful. They not only revealed the different grocery budgets for each household but also the different attitudes towards food the rich and poor have. As Neil discovers this difference, so do us readers. Relatability is one of the biggest advantages for choosing a first person point-of-view, and Roth exploits it to full potential. We know Neil Klugman because he is us. He’s just a guy who wants a better poker hand than he was dealt.

Though class difference influences the plot, the theme is aspiration. Roth spends several passages detailing Neil’s life away from his visits to Short Hills. He works in a library, a job he hates, but one that he knows will be his lifelong career. He describes a boy who comes to library every day to look at an art book filled with Paul Gauguin’s Tahitian paintings. Perhaps the boy’s intrigued by Gauguin’s bare-chested women, but it’s the setting he talks about with Neil. Tahiti! The boy stares at the paintings and dreams of a life there. Neil visits Brenda at Short Hills and dreams of a life with her there.

I had strange fellows at the library and, in truth, there were many hours when I never quite knew how I’d gotten there or why I stayed. But I did stay and after a while waited patiently for that day when I would go into the men’s room on the main floor for a cigarette and, studying myself as I expelled smoke into the mirror, would see that at some moment during the morning I had gone pale, and that under my skin, as under McKee’s and Scapello’s and Miss Winney’s, there was a thin cushion of air separating the blood from the flesh. Someone had pumped it there while I was stamping out a book, and so life from now on would be not a throwing off, as it was for Aunt Gladys, and not a gather in, as it was for Brenda, but a bouncing off, a numbness.

Goodbye, Columbus is a novella of 136 pages, but it comes in a book with five short stories. I haven’t read the stories, but I intend to read them. In fact, I intend to read more novels and stories by Philip Roth. The two novels I’ve read have incited my interest in his work. He writes about America as it is rather than how we want it to be. I suppose that’s the job responsibility of an American novelist, but Philip Roth performs this duty to perfection.