Game of Thrones: Quest for Belonging 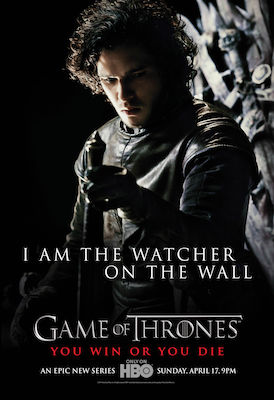 I love the what’s happening with television these days. Television has always been about entertainment, but the best entertainment insists on being something more than just entertaining. It insists on delving into the characters, exploring their emotions and the reasons behind them, understanding their goals and motivations, and examining their morals, psychology, and desires. Looking back at many of the shows I had enjoyed as a kid, I realize that many were, if not mindless, at least simple.

Gilligan’s Island is a perfect example. Every episode could be describe with the same synopsis: The castaways find a way to escape the island, which Gilligan befuddles during the last act. Worst than the simple plot, every character could be summed up with a simple epithet, which they played in the theme song: With Gilligan/The Skipper too/The millionaire and his wife/The movie star/The professor and Mary Ann.  Three seasons later, the characters could be described in the same clipped way. With Gilligan as the clown and Skipper as his straight man, the antics were fun to watch, but not very meaningful. If produced today, I doubt that Gilligan’s Island would survive its pilot episode, because the television series had evolved and audiences had learned to expect more from the shows they watch.

This evolution began in the 70’s with the success of such miniseries as Shogun, Roots, and Rich Man, Poor Man. It continued into the 80s with such character-based series as Dallas, Dynasty, and Hill Street Blues. During the 90s, we see the tread infecting television comedies like Frasier and Friends. We see it in fantasy shows like Xena: The Warrior Princes and Buffy the Vampire Slayer. By 1999, when HBO first aired The Sopranos, the die had been cast, and America’s favorite television series now required complex characters facing complex but realistic problems. Stronger characters led to more intriguing plots. These days, that formula plays best on HBO’s Games of Thrones.

Earlier this year, I examined the character arc of Daenerys Targaryen, as it played out in Season 1 of the series. As I explained during that blog post, while the rest of the world had moved on to Season 6, I’m still exploring the possibilities and revelations of Season 1. I had decided to write three more posts about this season before I read The Clash of Kings, George R. R. Martin’s second novel in his Song of Ice and Fire series, or watch Season 2. Like the posts about Daenerys, these other posts will focus on character arcs for a specific character. These characters will be Jon Snow, Tyrion Lannister, and Arya Stark. Along with Daenerys, these are the characters I believe have the most interesting arc. In this post, I will look at the character arc for Jon Snow, played by Kit Harington.

Warning: There is no way to write about a character’s arc without divulging plot events. One advantage about writing about Season 1 is that I can assume that any reader interested in this article is familiar with the story and plot.

The Rut of the Litter 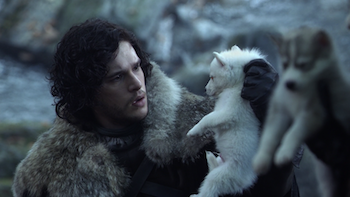 As Ned Stark’s bastard son, Jon Snow struggles to know where and how he fits into the family. Though his half-siblings love and accept him, Ned Stark seems cold and regretful towards him. Since he’s a living, breathing, and talking symbol of Ned’s infidelity, Lady Stark loathes him. Though Martin’s main theme is power—how it’s gained and lost, how it’s used and abused—he explores a secondary theme that concerns those society’s castaways. For the sake of my Game of Thrones analysis, I call these people The Unwanted, but in episode 4 Tyrion sums them up as Cripples, Bastards, and Broken Things. In his character arc, Jon Snow represents this group. His personal goal is a quest for belonging.

Because, though he’s Lord Stark’s son, he doesn’t belong at Winterfell. In an early scene, as Ned Stark led an execution party back to the city, they stumbled across a dead direwolf. Five pups attempted to suckle the corpse. Ned ordered his men to kill the pups, but Jon intervened. He reminded Lord Stark that the direwolf was the sigil of the Stark clan, and as Ned had five children there were five pups. Drawing significance from this equation, he convinced his father to distribute the pups as pets to his children. When a sixth pup was found, the rut of the litter, Theon Greyjoy, Ned’s hostage, said, “That’s one yours, Snow.”

No doubt this was the life Jon faced—getting the leftovers. The needs of the legitimate children came first. If Ned never neglected Jon, we see no evidence that he ever showed him any warmth. Honor was important to Ned Stark—his fatal flaw—and Jon was a sad reminder of a time when he had failed to live up to his sense of honor. When King Robert arrived at Winterfell and House Stark honored him with a banquet, Jon’s assigned seat was so far from the family table, he decided not to attend. When Benjen Stark, Jon’s uncle, arrived, Jon saw an opportunity to leave Winterfell. Like Ben, he would join the Night’s Watch and protect Westeros from the evil that lurks above the wall.

As his brother Bran lay broken and unconscious, Jon visited him to say good-bye. Lady Stark, also in the room, glared at him. In a voice that reminds me more of a cat’s hiss than a human language, she told him to go away. This was a beautiful and effective scene, because at that moment, I realized that Catelyn Stark would never accept him. Love is always balanced with hate. Her love for Ned was balanced with her hatred of his bastard. As she would never lose her love for Ned, she would never lose her hatred for Jon. It served to underline Jon’s hopeless situation in Winterfell and why he needed to leave. Like all who join the Night’s Watch, he was unwanted.

There are five pups. One for each of the Stark children. The direwolf is the sigil of your house. They were meant to have them. 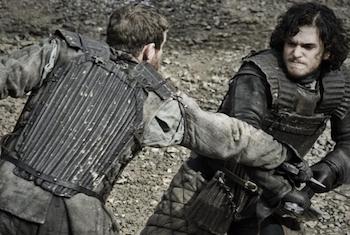 Soon after leaving Winterfell, as he met the other recruits for the wall, Jon became disillusioned with his choice. Tyrion Lannister, traveling to the wall as a tourist, noticed Jon’s sour looks at the rapists and robbers who composed the recruits. He told Jon that there was no glory to be found in the wall, that the Brotherhood, the Night’s Watch, was more a collection of criminals, bastards, and others society had no place for. Once training began and Jon saw the inexperience the other recruits had, their lack of skill with swords, his disillusionment grew stronger. Were these ruffians to be his brothers? He made quick work of them in training, which caused Ser Alliser Thorne to call him useless. Tyrion was more specific in his reprimand; he chided Jon for acting superior to his fellow recruits.

Jon took this advice to heart. During the next training session, instead of exploiting his comrades’ weaknesses, he began to train them and give them advice. This helped him forge friendships with them. When Samwell Tarly arrived at the Wall, like the other recruits, Jon was at first offended by Sam’s weight and cowardice. But in a later scene, Jon learned that, though Sam was the legitimate son of a lord, his father disowned him and threatened to kill him if he didn’t take the black. Hearing this, Jon realized there was more than one way to be a bastard. He told his friends that Sam wasn’t to be mistreated, because he was like them. He had no place to go. He was just another unwanted.

In these scenes, Jon abandoned his contempt of the others and began to realized that they weren’t much different than him. But he still felt loyal to Winterfell and to the Starks. When Benjen Stark, a ranger, was leaving on patrol, Jon begged to go with him, but Ben refused. No doubt it felt like another rejection from the Starks, but worst, because it was a rejection from the one Stark whose path he was following. He sought news from Winterfell. He felt pleased to hear that Bran regained consciousness. He wished he could be there to see his brother. But his place now, as others kept reminding him, was the wall.

He solidified that place by taking an oath. This is a society where oaths have the binding of law, where oath breakers are beheaded. We learned that in the first episode, in our first meeting of Jon Snow, as he witnessed his father executing an oath breaker. Jon was now one of the Brotherhood. But did he consider them his family? Has he found his place?

Night gathers, and now my watch begins. It shall not end until my death. I shall take no wife, hold no lands, father no children. I shall wear no crowns and win no glory. I shall live and die at my post. I am the sword in the darkness. I am the watcher on the walls. I am the fire that burns against the cold, the light that brings the dawn, the horn that wakes the sleepers, the shield that guards the realms of men. I pledge my life and honor to the Night’s Watch, for this night and all the nights to come. 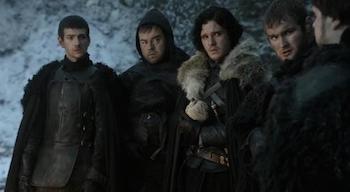 Even after taking the oath, Jon struggled with mixed loyalties. Though never a “Stark,” he can’t distance himself from his father’s and brother Robb’s political problems. After word came of Ned Stark’s arrest for treason, Ser Alliser goaded Jon into attacking him by calling his father a traitor. Placed under house arrest, Jon’s future even in the Brotherhood looked bleak. But when he saved Jeor Mormont, the Night’s Watch commander, from attack by wight, a zombie-like creature, Jon regained Mormont’s good graces.

But worst news was to come. In King’s Landing, King Joffrey ordered Ned Stark beheaded. This forced Robb Stark, now Lord Stark, to wage war against the young king and the House Lannister. When news of these events reached the Wall, grief seemed to answer Jon’s question of loyalty. Though Sam tried to stop him, Jon deserted the Night’s Watch. He became an oath breaker. As such, it would become Robb’s duty to execute him on sight. But he never reached that far. Led by Sam Tarly, Jon’s friends from the Brotherhood pursued him. In the climatic scene of this character arc, they surrounded Jon and recited the Night’s Watch oath. Hearing the oath, realizing that those who now surrounded him treated him more like a brother than own siblings, he realized he belongs with them. They were truly his brothers. He returned to the Wall with them.

The next day, when he and Mormont talked, Mormont asked Jon if his loyalty had been decided. When Jon answered yes, Mormont said that he was leading soldiers north to search for Benjen Stark and to learn more about what was happening beyond the wall. He wanted Jon with him, but he needed to be able to trust Jon’s loyalty and commitment. As we met Jon on a horseback, we leave him on horse back. As we met him riding with one party of men, including his father and brothers, we leave him riding with another party of men, including Mormont—a father figure—and members of the Night’s Watch, his brothers.

Jeor Mormont: Honor made you leave, and honor brought you back.

Jon Snow: My friends brought me back.

Jeor Mormont: I didn’t say it was your honor.