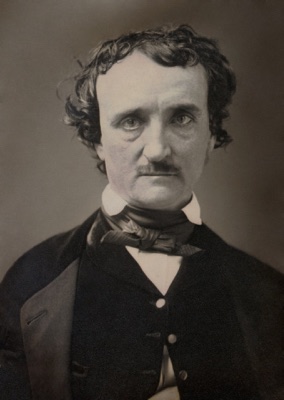 On December 26, 1811, the Richmond Theatre in Richmond, Virginia burned down. Since seventy-two people died, it was the worst disaster to date in American history. To commemorate it, they built the Monumental Church on its site. This Episcopal church still stands today. The location must’ve been important to Edgar Allan Poe. His mother’s final performance was at the Richmond Theatre. Three weeks before the fire, on December 8, she died. After her death, John and Francis Allan took Poe in and raised him. For their church services, they attended the Monumental Church. Speculative, I know, but it’s not hard to imagine that his mother’s death and the deadly fired entwined in Poe’s mind as related events, that they fueled the dark imagination that would become his legacy.

Perhaps that is just a fancy of mine. He was, after all, only two, almost three, when his mother died and when the theater burned down. He was born January 19, 1809, in Boston, Massachusetts. His father, David Poe, Jr., was a law student until he met actress Elizabeth “Eliza” Arnold Hopkins. He dropped out of law school, joined the Charleston Comedians–the touring troupe she belonged to–and married her. Nine months later, they had their first child, William Henry Leonard. Edgar Poe was born two years after William. Before their third child, Rosalie, was born, David abandoned the family. It’s unclear what became of him; he was never involved in Poe’s life again.

Poe’s relationship with his foster parents was often tense. John Allan was a Richmond merchant and tobacco exporter. In 1815, to grow his business, he moved the family to London, England. While in Great Britain, Poe attended school in Irvine, Scotland, and Chelsea. His final school during this period was Reverent John Bransby’s Manor House School. Allan’s business in London failed. The family returned to Richmond in 1820. John was all but broke.

But in 1825, his uncle, one of the wealthiest men in Richmond, died. William Galt left Allan an estate valued at over $750,000. They moved into a luxury house called Moldavia. During this time, Poe began courting 15-year-old Sarah Elmira Royster. They became engaged, but the engagement fell apart, probably due to an intervention of Royster’s parents.

After this I call to mind flatness and dampness; and then all is madness—the madness of a memory which busies itself among forbidden things.

I doubt that Allan and Poe’s relationship was ever a loving relationship, but their first significant rift began while Poe was at college. Poe began studying at the University of Virginia in 1826. When Thomas Jefferson founded this college, he envisioned it as a university directed by its students. Chaos ensued. Though there were rules against gambling, gambling became a favorite pastime for Poe. He ran up gambling debts that he expected Allan to cover. He also accused Allan of not sending enough money for books, enrollment, and housing cost. Poe’s stint at the university lasted only a year.

In 1827, now living in Boston, he enlisted in the Army. He lied about his age, saying he was 22 when he was only 18. He also gave a fake name, Edgar A. Perry. He did well in the Army; he rose to the rank of Sergeant Major for Artillery. During this time, he published Tammerlane and Other Poems (1827) It was his first published work. Growing tired of the Army, he pressed for early release. He confessed to his commanding officer that he had lied about both his age and name when enlisting. The commanding officer refused to discharge Poe unless he reconciled with Allan. Poe wrote several letters to Allan to reconcile, but Allan ignored them.

But on February 28, 1829, Francis Allan died. Perhaps grief made Allan reconsider because he reconciled with Poe after her death. Poe was discharged from the Army shortly after. It was understood that he would join West Point as a cadet. During the two years between the Army and West Point, he lived in Baltimore with his Aunt Maria Clemm, his cousin Virginia Eliza, and his brother Henry. During this time, he published his second volume of poetry, Al Aaraaf, Tammerland and Minor Poems (1829).

On July 1, 1930, Poe entered West Point. Later that year, John Allan remarried. That marriage reignited old hostilities between Allan and Poe. I imagine it was Poe’s jealousy for the sake of Francis’ memory. Over the years, Allan had entertained several affairs and fathered several children in them. That began a contention between them; it caused their final estrangement. No longer feeling any duty to Allan, Poe sought to be court marshaled from West Point. He ceased going to classes or church, disobeyed orders, and neglected his duties. Found guilty, he was discharged. That was February 1831.

Later that year, in August, his brother Henry died. For the rest of Poe’s life, he dedicated himself to being a full-time writer, to make a living as a writer and only as a writer. That’s a challenging goal to achieve at any time, but in the United States during that epoch, it was next to impossible. The absence of international copyright laws allowed American publisher to publish, royalty-free, works of famous English writers. Why take risks on unknown American writers when you can raid proven best-sellers from overseas?

The salvation for Poe and other American writers was the America periodicals—magazines and newspapers. They were in constant demand for fresh material. That’s the reason why America’s first fiction writers, like Washington Irving, Nathaniel Hawthorne, and Edgar Allan Poe, established themselves with short stories.

“That is another of your odd notions,” said the Prefect, who had the fashion of calling everything “odd” that was beyond his comprehension, and thus lived amid an absolute legion of “oddities.”

As part of this effort to make a literary career, Poe worked as an editor at several periodicals. The first was the Southern Literary Messenger in Richmond. He took the job in August 1935, but he lost it only a few weeks later, due to being drunk at work. After losing this position, he returned to Baltimore to live with his aunt. While there, though his cousin Virginia was only 13, she and he became engaged. After Poe promised good behavior, Thomas W. White of the Southern Literary Messenger rehired him. He kept this post until January 1837. A few installments of The Narrative of Arthur Gordon Pym of Nantucket were first published in the Messenger, but the public wouldn’t see the completed novel until 1838.

Poe and Virginia wedded on May 16, 1836. After Poe left the Messenger, his next position was as an assistant editor with Burton’s Gentleman’s Magazine in Philadelphia. He took that job in 1839. Later that year, he published Tales of the Grotesque and the Arabesque. After leaving Burton’s, he found a position at Graham’s Magazine, another Philadelphia publication. While in Philadelphia, he sought to found his one periodical, The Stylus, but he never did.

He found his opportunity to own a magazine in New York when he became the owner of the Broadway Journal. He began as its editor, but he eventually found the means to buy it. An unsuccessful magazine before his ownership, it continued to be unsuccessful. It failed in 1846. Poe and Virginia moved to a cottage in Fordham, New York. On January 30, 1847, Virginia died of tuberculosis.

An anthem for the queenliest dead that ever died so young—

A dirge for her the doubly dead in that she died so young.

After her death, the rest of Poe’s life feels anticlimactic. In Richmond, he renewed his relationship with his childhood sweetheart, Sarah Royster. Some sources say they became engaged. Even if so, they never married.

On September 27, 1849, Poe boarded a train from Richmond to New York, but he never made it to New York. After he had been missing for several days, a passerby found him in Baltimore on October 3. Poe was weak, disoriented, and wearing a stranger’s clothing. He was taken to Washington College Hospital, where he died on the 7th. He never never revealed what happened during the missing week. He repeatedly said, “Reynolds,” but no one knew whom he was referring to. There had been many speculations about this lost time, but I won’t share them here. Tragic as it is, I like the mystery surrounding his death. It seems apt for his life and work.