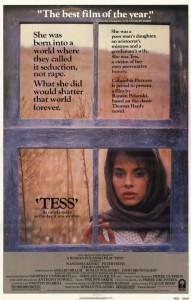 I first saw Roman Polanski’s Tess (1979) in December of 1981. It was my final quarter at Western Washington University. My roommate, Eugene, and I needed a break from studying, and the movie was playing at a campus auditorium. At the time, I had never heard of Thomas Hardy or of his infamous novel, Tess of the D’Urbervilles. Nor had I heard of the movie. I knew the name Roman Polanski, but only in a vague, abstract way. Though I had seen Rosemary Baby (1968) and Chinatown (1974), at the time I payed little attention to directors. Gene, a literature major, knew the story and felt excited to see the movie, but for me, it was just a way to kill three hours.

Each month, I am going to review a favorite movie on this blog. In September, I reviewed Star Wars (1977). As Star Wars taught me how fun and imaginative a movie could be, Tess taught me how important a movie could be. More than this, watching Tess that December day started a process that I think of as The Great Decision. Like the opening line of Robert Frost’s most famous poem, “two roads diverged in a yellow wood,” and I found myself deciding which I should take.

One road was the path I was on. At Western, I majored in Business Administration. Up until that moment, I envisioned a financial career–in banking or investment. I saw myself working up the corporate ladder. It was the easy path, the logical path, the secure path. But somewhere deep down in me, I knew it wasn’t the path I wanted. That other road existed prior to my seeing Tess, but seeing this movie gave me permission to look down that road and considered taking it. It took a year of self-reflection to decided that this road–”the one less travel by”–was the road I would take. Tess has a powerful plot and explores important themes, the actors performed well, and the cinematography won the Oscar, but these are not the reasons Tess is a favorite movie. It is a favorite movie because of what it means to my life. I am a writer because I saw Tess.

Based on the 1891 novel, Tess of the D’Urbervilles by Thomas Hardy, Tess tells the story of Tess Durbeyfield. One day as her father was returning home, he met a parson interested in genealogy. The parson told John Durbeyfield that he was the last of a great noble family, the D’Urbervilles. Armed with this knowledge John and his wife decided to send their eldest daughter, Tess, to visit a Mrs. D’Urberville who lives in a nearby town. Thinking Mrs. D’Urberville a wealthy but distant relative, they expected Tess to claim kin. Instead of meeting Mrs. D’Urberville, who was an invalid, Tess met her son, Alec. Pleased by her beauty, Alec–who is no relations–exploits her family’s poverty as a means to seduce her. When she shuns his advances, he rapes her. The movie tells the story of Tess’ efforts to recover from the rape and build a life for herself.

Nastassja Kinski, who was only 17 during the filming, plays the title character. Though she had starred in several movies prior to this, Tess was her breakout role. This was the movie that introduced her to the American audience. She plays Tess as a quiet, stoic woman, practical and independent. This is faithful to the novel, which was controversial in its day, because its sympathy lay with the victim rather than with the “seducer.” Kinski invokes our sympathy with a balanced between quiet resignation and passionate outburst. This is a woman holding in a lot of grief and pain. Writers talk about character arc, the way character changes over the course of the story. With Kinski’s subtle but skilled performance, we watch Tess change from responsible farm girl to resentful mistress to hopeful fugitive. 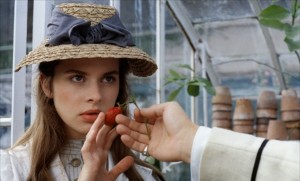 Leigh Lawson played Alec D’Urberville. There is a danger, I believe, in playing the quintessential Victorian scoundrel. If overacted, the archetype becomes a caricature. But Lawson’s Alec is no caricature. He portrayed Alec as a man torn between his selfish desires and his penitent wish to help Tess. His help comes with expectations–of that there is no mistake–but his offer to help is sincere. Peter Firth plays Angel Clare, the son of a hell-and-brimstone pastor, and the man Tess loves. He’s fun-loving but philosophical, intelligent but cynical. He proves too idealistic for Tess’ harsh reality. These are the two men in Tess’ life–the man who raped her and the man who can’t forgive her for being “weak.”

As well as directing the movie, Polanski cowrote the screenplay with Gérard Brach. They wrote it in French, and John Brownjohn translated and expanded it in English. Theirs is a faithful adaptation of Hardy’s novel. It made for a long movie, 3 hours, but it is a beautiful movie. Anthony Powell won the Academy Awards in best costume; Geoffrey Unsworth and Ghislain Cloquet won the Oscar in cinematography. Along with dialogue and action, Polanski chose to tell the story with images.

In one scene, for example, Tess, working as a field hand, sits down for a lunch break. Her sister approaches, carrying a baby. As Tess opens her blouse to suckle the infant, the men workers divert their eyes to give her privacy. Thomas Hardy wrote it; Roman Polanski filmed it. The movie is punctuated with such images borrowed from the novel. They do slow the pace. If you are not one for sedate action or literary imagery, you might be put off by how much you learn about 19th Century farming methods. But these images do more than educate. Tess is a story that lasts several years, and moving from one harvest to the next harvest demonstrate those passing years. These images also demonstrate the trap closing in on Tess, as each year, her life becomes more desperate. They lead Tess to her climatic dilemma and to her last desperate attempt for happiness.

Thomas Hardy’s style is often described as fatalistic. Tess’ beauty is her tragic flaw, and it leads her into sorrow and catastrophe. This is no feel-good story. There is no uplifting end. Perhaps Polanski–no stranger to catastrophe or sorrow–was the prefect director for this story. The last time Sharon Tate–soon to be a victim of the Manson murders–saw her husband, she gave him a copy of Tess of the D’Urbervilles and suggested he adopts it into a movie. She saw herself as its star. For that reason, Polanski dedicated Tess to Sharon.