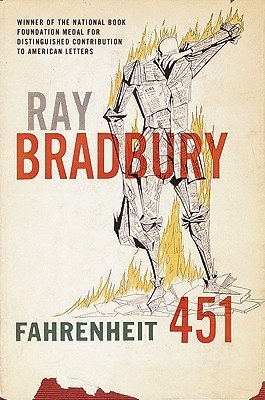 When the alarm sounds, the firemen rush to the firetruck and race across town to the given address. No house is on fire. No one is suffering a heart attack. There isn’t even a cat stuck in a tree. In this dystopian American of the future, firemen do not put out fires; they start them. They burn books–Shakespeare and Keats, Whitman and Dickens, Herodotus and Plato. Reading books breeds unhappiness. Since no one wants to be unhappy or should be unhappy, the books must go. Such is the government’s thinking in Ray Bradbury’s Fahrenheit 451.

Ray Bradbury (1920-2012) is one of America’s best known and most respected science-fiction writer. Science fiction is a wonderful genre for social commentary, because it allows the writer and his reader to examine the flaws of our era exaggerated over time to some future epoch. If this trend continues, this will be the result. Bradbury was a master of this tactic, and in Fahrenheit 451 he employed it with skill.

The novel tells the story of Guy Montag, a fireman charged with burning books. He mets a young woman, Clarisse, who tells him he isn’t like other firemen. She talks to him about such trivial things like the man on the moon and how grass in the morning is often covered with dew. “You think too many things,” he tells her, but her words incite uneasiness in him. Like Clarisse, he is full of curiosity, and in this dystopian society, curiosity is a dangerous thrill. Clarisse sees through his mask. If she can see through it, could others? Guy Montag has secrets.

Fahrenheit 451 is considered a classic both in science fiction and literary genres. It is an easy book to read; it has a simple plot. One could read it purely as an action novel and find enjoyment in it. I think there is more enjoyment in going beyond the plot and examining the characters, especially Montag, and at eyeing the society they live in. How close are we do that world?

During one passage in the middle of the novel, I found myself wondering: If Bradbury wrote this novel in the Facebook Age, what would he change? How much closer would he feel we are to this dystopian future? Pictures of cats make us happy–they are allowed. But words! Words can be dangerous. Best replace them with OMG and LOL and WTF. Better yet, replace them with icons–:) or <3. Much better! The threat neutralized!

This is a good novel; I recommend you read it.