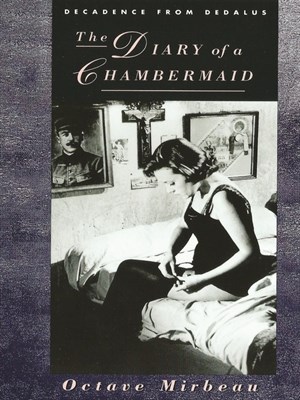 After finding and losing eleven jobs in two years, Célestine, a domestic maid, took a new position in the country. In an effort to understand her failure to find stability, as she began working for Isidore and Euphrasie Lanlaire, she purchased a diary to record her daily life and reflections of her personal history. In the diary, Célestine proves herself to be a frank and critical observer of the lives of domestic laborers and the households they serve. She narrates her story in a voice filled with both wry humor and angry indignation. Her diary is sexy, entertaining, and full of social criticism.

Unlike my survey of Doyle’s Sherlock Holmes novel—which this project replaces—this survey doesn’t have a clear end. It is my intention for the next year or two to read an erotic piece once a month or so and review it. The purpose is to judge these works using the same criteria I would use to judge any literary work. These include such topics as plot, character development, theme, setting, style, voice, etc. And like all reviews, I’ll seek to answer the question: Should you, the reader, read this work? Is it worth your time, or is your time better spent reading something else?

French writer Octave Mirbeau wrote this epistolary novel in 1900, in the wake of the Dreyfus Affair. An epistolary novel is a novel written to resembled other writings forms, like letters, newspaper articles, and diary entries. In the early days of fiction writing, nearly all novels were written as a series of letters. It was the communication that people were used to writing and reading. Though it had fallen out of favor long before Mirbeau wrote The Diary of a Chambermaid, it had never disappeared as a storytelling option. One modern example is Alice Walker’s The Color Purple, which is formatted as a series of prayers. Like any literary form, it has its strengths and weaknesses. One of the weaknesses is the lost of tension, since we know—no matter how dangerous a situation is—the protagonist writing the epistle survived it. But its best strength lies in its familiarity. This allows us instant recognition and sympathy to the protagonist. Since in this novel, Célestine faced little personal danger but needed a forum for exploring her thoughts and life, the diary format works beautifully.

As far as I’m concerned, it’s perfectly simple: I’ve never seen any money that wasn’t dirty or any rich people who weren’t rotten.

The Dreyfus Affair was a political scandal in French that began in 1894 when Captain Alfred Dreyfus was sentenced to life imprisonment for espionage. His accusers accused him of proving French military secrets to the Germans. He was sent to Devil’s Island. But in 1896, evidence came to light to show that the true traitor was Ferdinand Walsin Esterhazy. Though this evidence should’ve cleared Dreyfus, the government kept him imprisoned on Devil’s Island. French society became divided between Dreyfus’ supporters, called Dreyfusards, and his distractors, called anti-Dreyfusards. I don’t pretend to understand all the ins and outs of the Dreyfus Affair and what it meant for France at the time, but it created a rift that threatened civil war, a rift between the aristocracy and the common people, between the royalists and those who favored the republic. Mirbeau, a Dreyfusard, laced passages about this crisis into the The Diary of a Chambermaid, making the Dreyfus Affair a backdrop to Celestine’s troubles and her troubles an extended metaphor to the crisis.

Though The Diary of a Chambermaid is commonly considered an erotic novel, it is not my impression that Mirbeau intended it to be one. Célestine is a healthy young woman, a beautiful blond, who like everyone experiences desire. Over the course of her life, she became involved with several men, and she writes about these affairs with candor. She regrets these affairs not for moral reasons, as her Catholic upbringing would suggest, but because they failed to provide her the happiness and stability she craves. Though she’s frank while talking about her love affairs, she isn’t explicit. There are no explicit sex scenes in this novel. The sex happens—as the phrase goes—between the lines.

What does happen on the page is the social criticism one would expect from a Dreyfusard. Though sex is a major theme in this novel—fulfilling my definition of erotic literature—the biggest theme is hypocrisy. The bourgeois who employ Célestine and her fellow servants have one set of morality for themselves and another, stricter, morality for their staff. One metaphor Célestine turns to often is the dirty underwear her employers wear beneath their fashionable clothing. Another metaphor she drives home, especially in her passages about the placement services used for domestic help, is prostitution. The daughter of a prostitute, Célestine likens her position as a maid to that as a prostitute to pimps and johns. It is harsh criticism, emotional, and since its phrased in her voice, very powerful.

I escaped as quickly as I could so as not to laugh. Yes, I wanted to laugh, and yet a quite different feeling was singing in my heart…something—how shall I put it?—a motherly feeling. True, I shouldn’t like to sleep with Monsieur Lanlaire…but one more or less, what difference would it really make? I could give the poor old chap some of the pleasure he’s deprived of, and I should enjoy it as well, for in love it’s perhaps even better to give happiness to others than to receive it yourself. Even when our own bodies don’t respond to their caresses, what a pure and delightful sensation it is to see some poor devil lying enraptured in our arms? Besides, what a joke it would be to spite Madame..I must think about it.

The weakest element in The Diary of a Chambermaid is the plot. In truth, I think plot suffered in most epistolary novel’s I’ve read. Since the way we tell in a story in fiction is much different than the way we write letters or keep diaries, epistolary novels have a different flow than straight narration. But the problem seems more acute in The Diary of a Chambermaid, because the story felt like it began with one plot, but ended with another. I’m undecided if that’s true, or if changes in Celestine’s world view, her character arc, caused the shift in direction. Either way, I felt it was handled clumsily, and I think a few more rewrites would’ve helped the story. Also in the middle of the novel, a twelve-year-old girl was raped and murdered. Because of its placement, this was never going to be more than a subplot, but it never developed as a subplot. It was mentioned, and then for a couple diary entries, Clara’s murdered was Célestine’s top focus, but then it disappeared. Célestine believed she knew who had killed the girl, and Mirbeau hints that the reader should trust her instinct, but I would’ve preferred a more definitive answer to the mystery.

But the novel’s greatest strength is its character development, especially in Célestine. As I stated above, the advantage of an epistolary novel is instant sympathy with the narrator. Célestine earned that sympathy early and maintained it throughout the novel. Though we might not always agree with her decisions, we understand why she made them. We are moved by some of the hardships she had faced, angered by the injustices she experienced, and worried about her future welfare. Though she ended the novel—the diary—on a contented note, it’s a bittersweet ending that makes me wondered if she’s truly happy and secure.

The Diary of a Chambermaid is a good but not a great novel. I think what I like best about this novel is that tells the story about people who are not often literary protagonists—the domestic help. As such, it blazed the trail for such contemporary novels as The Help by Kathryn Stockett and The Remains of the Day  by Kazuo Ishiguro. In truth, I’ve never read either of those novels, but Mirbeau piqued my interest in such literature, so I’ll add both to my—every-growing—reading list. I like the eroticism of this novel, because it felt neither forced nor exaggerated. What sex there was felt exactly like the sex Célestine would experience and her description—via suggestion rather than explicitness—felt honest to the character. Though it is easy to read, I wouldn’t call it light reading, because social criticism is its true nature. I recommend this book as a good read.