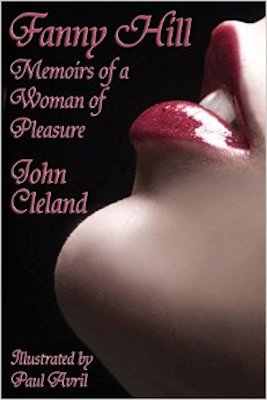 Published in 1748 under the title Memoirs of a Woman of Pleasure, Fanny Hill tells the story about a young woman, orphaned at 15, who travels to London to make her way. She intended to find employment as a domestic servant, but instead she fell in with madams, prostitutes, and pleasure seekers, who steered her into a life of prostitution. Along with being the protagonist, Fanny is also the narrator. She tells her story in two letters to an unnamed woman. In frank and  candid language, she tells about such episodes as the lost of her virginity, her first orgy, and her introduction to S&M. The sex scenes are hot, but beneath them lie the uncomfortable reminder that she’s only a teenager and that she lives in a society that left her, as a woman alone in the world, no choice but prostitution.

John Cleland (1709-1789) was a failure. The son of a civil servant, he was kicked out of school for undocumented reason. Since it was never documented, we have no idea what infraction he broke. Some suspect homosexuality. Others believe his volatile personality led to too many fights. He joined the East India Company, first as a soldier then as a civil servant. After years in Bombay, he returned to London in 1740, because his father was dying. After the death of William Cleland, John’s mother, Lucy, who controlled the estate, refused to support him. That caused him to be sent to debtor’s prison in 1748. While in debtor’s prison, he wrote Fanny Hill. He published it in two installments, November 1748 and February 1749. I’m assuming that proceeds from these publications allowed him to pay off the debt to effect his release. But his freedom was short-lived, because the authorities arrested him in November 1749—this time for pornography. Apparently, not everyone appreciated the explicit sex scenes in Fanny Hill.

Cleland negotiated himself out of trouble that time by agreeing to disavow the novel and to pull it from publication. From 1749 until 1970, it was illegal to publish Fanny Hill in the United Kingdom, but underground publishers broke that ban and kept the book in circulation. In the United States, the ban was lifted in 1966, when in Memoirs v. Massachusetts, the U.S. Supreme Court ruled against censorship of Fanny Hill. As for Cleland, after the disgrace over Fanny Hill, he struggled to eke out a literary career, but nothing else he wrote stands out as a remarkable success. He died in 1789, still resenting his mother for refusing to support him.

In deciding Memoirs v. Massachusetts, the Justices referred back to a previous case, Roth v. United States (1957) that defined the test for whether a literary work is obscene, and therefore unworthy of First Amendment protections. Roth test involved three simple questions: 1) Does it appeal to prurient interest? 2) Is it offensive? and 3) Does it have redeeming social value? Though the Justices agreed that Fanny Hill  was prurient and offensive, they couldn’t say it had no social value. That, of course, is the barrier to censorship. How do you prove a work has no social value?

As a book reviewer, I must judge this novel for its literary merits. That is also a series of simple questions. Was it fun and interesting to read? Did it have a compelling plot? Intriguing characters? A thought-provoking theme? I can add a few questions to this list, or rephrase those on it, but these four questions will serve the purpose of this review.

The form of Fanny Hill is as an epistolary novel, that is a novel written as a series of letters. It was a common form for novels of the 1700s. I have always found the epistolary form less satisfying than straight narration, but there have been interesting exceptions, most notably is The Color Purple by Alice Walker. (I’m currently reading The Perks of Being a Wallflower by Stephen Chbosky, so far another epistolary novel with a satisfying narration.) The problem with the epistolary novel is that the way we tell a story in a letter or a diary entry and how we tell it in narration are different. There is an emotional distance between the events and the telling of them in a letter. The cleaver writer, like Walker and Chbosky, manages to imbue their epistolary narration with emotions, and at times, Cleland also evoked emotions. He was not without talent, but his style read wooden and archaic. (As any novel from the period would.) At times, I found him difficult to follow.

Then, who can express the fire his eyes glistened, his hands glowed with! whilst sighs of pleasure, and tender broken exclamations, were all the praises he could utter. By this time his machine, stiffly risen at me, gave me to see it in its highest state and bravery. He feels it himself, seems pleased at its condition, and, smiling loves and graces, seizes one of my hands, and carries it, with gentle compulsion, to this pride of nature, and its richest master piece.

The plot began well, with Fanny, at fifteen, finding herself stranded in London without the means to support herself. The first third of the book detailed her movement into a life of prostitution, and it was that part of the book that I found most interesting to read. In Fanny, it gave me a character to care about, to worry over, to emphasize with, and I liked following her story. She’s easy to like. And she does experience a character arc that takes her from a naive and vulnerable girl to a confident woman. We met her at 15 and leave her at 19, and during those four years, we watch her grow and mature. She passes from wanting sex to satisfy her curiosity and desire to using sex as a means of support to realizing the best sex was motivated by love. As such, the theme is a Christian theme concerning the redeemed sinner. The ending, however, felt contrived. It is a principle of literature that the protagonist must solve her own problem. When the solution to her problem comes from outside, when it’s irrelevant of her actions and decisions, then we call that deus ex machina. Fanny Hill ends with such a device.

I liked reading Fanny Hill, but I can’t imagine every picking it up to read a second time. It has enough literary merit to justify its continue publication and distribution, but not enough to call it quality literature. It was never intended to be high art. Though Cleland claimed otherwise, I believe the only reason he wrote it was to raise the money to get out of debtor’s prison. I think it’s interesting to the scholar, especially one interested in the evolution of fiction, but I think it stumbles more than it stands up.