Do Androids Dream of Electric Sheep by Philip K. Dick 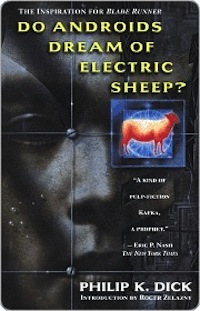 On Mars a group of android-slaves rebelled against their owners, stole a space ship, and came to Earth. Bounty hunter Rick Deckard must hunt them down and “retire them,” an euphemism for killing them. No doubt, you recognize this as the plot for the 1982 movie Blade Runner, an adaptation of Do Androids Dream of Electric Sheep by Philip K. Dick.

Like many writers, Philip K. Dick became better known after his death than during his life. Though he worked to establish himself as a mainstream writer, he wrote and published mostly science fiction novels and short stories. After high school, he attended the University of California, Berkeley, but he dropped out in 1950, in protest to the required ROTC training. He began selling stories the next year. He published forty-four novels and one hundred twenty-one short stories. He died in March of 1982 due to complications from a stroke.

Do Androids Dream of Electric Sheep chronicles one day of Rick Deckard’s life, a day devoted to destroying the rebellious androids. It is set in a dystopian future where healthy humans leave a dying Earth to colonize other planets. Reporting to work one morning, Deckard learns that his associate, Dave Holden, had been wounded in action. Eight androids came to Earth; Holden retired two. Deckard must retire the other six. This begins a mythic journey, during which Deckard examines his life and suffers moral qualms about destroying machines that look, sound, and act like human beings.

Though I don’t often read science fiction, I enjoyed this book, and I intend to read more from Philip K. Dick. It is a book, I believe, that can be read in layers. How deep do you want to go? If you want only escapist fiction, this book will fulfill you. If you want a novel that explores what it means to be a human being, or that searches for the source of divinity, or that projects what might become of our planet if the plagues of dying species and changing weather continue, then this book should also satisfy you. The best novels are not about ONE thing but about MULTIPLE things; they are about the complexity of life, mixed feelings, and uncertain futures. The best novels makes you think, even if you were just looking for escapist fiction. There is much to ponder on these pages.

The novel, however, does suffer from flat character development. None of the characters, not even the protagonist, Rick Deckard, felt fully developed. Even as I write this criticism, I find myself debating whether this was a weakness in the writing or an intentional effect. By not developing Deckard into a round character, Dick left us with the impression that Deckard is incapable of the self-reflection that the events in the novel require. Yet Deckard struggles to understand. He reminds me of Winston Smith in 1984 who, upon secretly buying a journal to record his thoughts, discovers he has no thoughts to record.

I would recommend this book to anyone who is interested in science fiction or who enjoys reading about dystopia.