Destiny and Desire by Carlos Fuentes 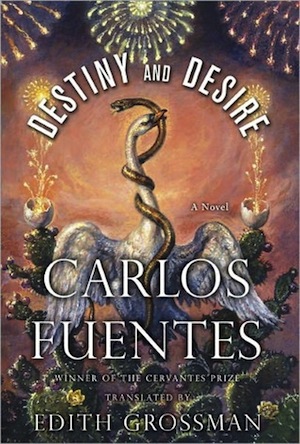 The fault, I confess, lies with me.

I couldn’t get into Carlos Fuentes’ Destiny and Desire. Though I read the book from the first page to the last, it was a struggle. I’m not sure why. I have no doubt that it is a great book, and I know others have enjoyed reading it, but it didn’t suit me. Was it the magical realistic style? Probably not since I enjoyed other novels in that style, like Gabriel Garcia Márquez’s One Hundred Year of Solitude. Was it the prose dominated by long, winding sentences? But I have read and enjoyed novels with longer, nearly endless sentences. (I’m looking at you, William Faulkner!) For whatever reason, I had trouble focusing on this novel.

Carlos Fuentes (1928-2012) had been called by at least one critic “Mexico’s top novelist.” The son of a career diplomat, Fuentes had a long and diverse life. He studied law, held the post of Mexico’s ambassador to France, and edited several literary magazines. But it was as a writer that he made a name for himself. In a succession of novels like The Death of Artemio Cruz, The Old Gringo, and The Hydra Head, Fuentes established himself of one most important writers of our time.

Narrated from the point-of-view of a severed head, that of the protagonist, Josué, Destiny and Desire tells the story of two friends, Josué and Jericó, who met in school and grew up best friends. Both have unknown parentage; both are the wards of guardians and lawyers. The mysteries surrounding their lives inspire an alliance that would see them through childhood and adolescence and into young adulthood. As adults, they pursued different careers, Josué in business and Jericó in politics, and through this device, Fuentes explores the division of power between big money and government. The style is magical realism, a style characterized by the effusion of magical or fantastical elements into an otherwise realistic setting.

My troubles with this book is that, as I read it, I felt I needed to know more about Mexican history and Catholicism in order to understand many of the allusions, plot twists, and characterizations. Fuentes was obviously well read, not just in literature (as I consider myself well read), but also in history, politics, religion, philosophy, and a host of other topics. More than once during the reading, I felt as if the purpose of a certain passage was to show off his knowledge. That is unfair criticism, I know, because if I had understood the allusions better, I wouldn’t feel this way. It was my ignorance rather than his intelligence that made this book inaccessible to me.

My ignorance, however, was the reason I read this book. Over the past few years, I have focused on reading The American Novel, until I fear my reading has become myopic. As I understand the recurring themes in American literature—like racism, the nature of freedom, the perpetual struggle between the Haves and the Have-nots, the pursuit of the American Dream—I have little understanding of the themes that inspire literature from other parts of the world. Of course, many themes, like racism, is global, but different nations and cultures have different histories with these issues, and therefore, different insight. Since I want to gain that insight, I believe I need to read more World Literature. Hence I’m taking a literary tour of the world. I hope at the end of this tour, I will be better read, perhaps to the point where I can better understand and enjoy Fuentes.

Since I had troubles with Destiny and Desire, it is hard for me to recommend it. But I want to let you know that I have not given up on Carlos Fuentes. I intend to read him again. Who knows, perhaps I’ll even come back to Destiny and Desire.