I finished reading A Storm of Swords last night. It’s the third novel in George R. R. Martin’s A Song of Ice and Fire series. I keep saying that I’m never going to catch-up with the rest of the world in Game of Thrones, because Martin writes these novels faster than I read them and the television seasons keep coming. But now that the final season had played on HBO, maybe there’s hope for me to catch-up. I have seen the first two seasons, but I decided that I’m going to finish reading the novels—at least those already written—before I watch the remaining seasons on television. As always, I want to experience the story and characters first as the written word, before I see the motion pictures.

Also last night, I finally watched It Follows. This is a horror movie that’s been around for a few years. When I first heard its premise—concerning a supernatural STD—I rowed my eyes and decided not to watch it. But during the past year, I’ve heard good things about it. So I added it to my Netflix DVD queue. It arrived a month ago, and it’s been sitting on the television stand, unwatched, ever since. Even after hearing good things about it, I wasn’t excited to see it. But I finally watched it last night. 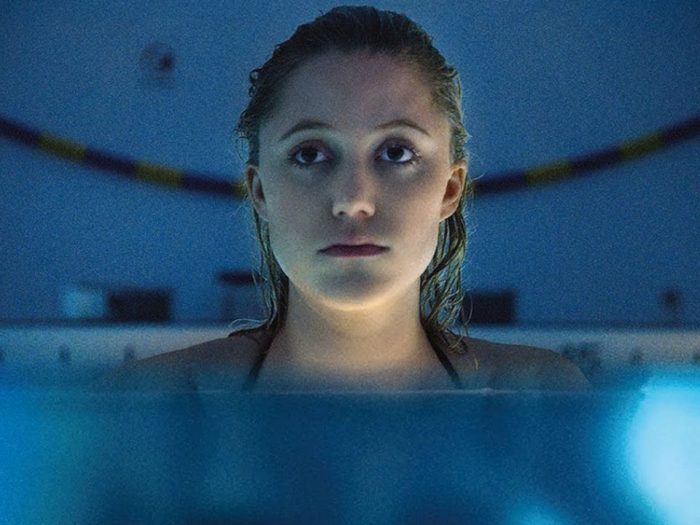 Got to tell you: It disappointed me. It was never scary. There were a couple fun scenes, I admit, but most of the movie was uninteresting. The threat never felt real. As the monster—it—followed at walking pace, its intended victim ran, rode bicycles, and even drove to flee it. Why do horror movies think slow-walking creatures are scary? I won’t say it never works—it worked in the original Halloween—but now it’s just an overworked trope that needs an extended vacation, if not full retirement.

The climactic scene happened in a building that made no sense to me. It broke me out of my willing suspension of disbelieve. Either it was an abandoned building that, for some reason, still had electricity and an indoor swimming pool full of clean and, presumably, heated water or it was an occupied building whose occupants where inexplicably absent and who left no security to protect the property from invading twenty-somethings. From the dialogue, we know that this state-of-affairs existed since they were in junior high—so what? At least five, six years?

So many better horror movies out there.

Since I last talked to you, I watched the third season of Jessica Jones on Netflix. It was entertaining, and I recommend it, but the first season is still the best. This is the last season for Jessica Jones, at least on Netflix. Disney is creating its own streaming service, so they’re going to pull all their properties from the other services. Will they reboot Jessica Jones? If so, I hope they keep Krysten Ritter as Jessica Jones. It’s hard to imagine anyone else in that role.

My current Netflix series is Another Life, but I don’t recommend it. It’s a sci-fi show that begins, like Arrival, with an alien craft landing on Earth, and involves, like Interstellar, a long-distance space expedition to finger out what’s happening, and, like Alien, the astronauts landing on a strange planet and bringing something deadly back on board. Maybe writer, director, and (I assume) showrunner Aaron Martin has original ideas, but if so, he’s saving them for his next project. I liked Katee Sackhoff. I loved her as Starbuck in Battlestar Galactica and I enjoyed her as Vic Moretti in Longmire. I would love to see her anchor a series, but Another Life isn’t it. I’ve watched three episodes. I’ll finish watching this season to see what they do with it, but I’m not optimistic that the show will redeem itself.

What happened to Netflix Original Series? What happed to that promise we found in the first season of House of Cards? Netflix still offers a lot of good entertainment, but they tend not to be the shows that they push on their banner ads. Most of what I find to enjoy are imports. I’m getting skilled at reading subtitles.

I know I’ve been silent on this blog too long. At the end of May, I got sick, and it lingered through most of June. When I finally felt better, I was so far behind in everything—not just my writing, but also my housekeeping, finances, etc.—that I felt I needed to take a sabbatical from this blog to catch-up on other things. But now I’m back. My editorial calendar is pushed back by a month, but I intend to resume it in August.

I’m introducing a new feature, almost a new format. I’m calling it Feature Writer. Instead of writing blog reviews about everything I read or watch, I’m going to focus on one writer a month and write about his or her work and contribution to literature. When I was in the hospital in March with my heart attack, my sister Roni gave me a book of Edgar Allan Poe’s tales and poems. What a great place to start this new feature. Poe is one of my favorite writers, and as an Early America writer, he’s the one I most often read and enjoy. I’m looking forward to sharing my thoughts, opinions, and knowledge about him with you.

On Saturday, August 3, I’ll post his biography. Since his first biographer, Rufus Griswold, was a literary rival who wanted to defame Poe, we tend to perceive Poe different than he was. He was an insane alcoholic, who indulged in opium, gambling, and other vices. There are half-truths behind that image, but a complete truth, I believe, is kinder to him than Griswold was.

If you want to get a head’s start of what I’ll write about, here’s a small list of what I intend to review:

On August 31, I’ll write a round-up review of other noteworthy stories and poems. If you are familiar with Poe’s work, I hope this survey will give you new insights into his work. If you are new to him, I hope it’ll introduce you to this writer who, without a doubt, earned his place in literary history.