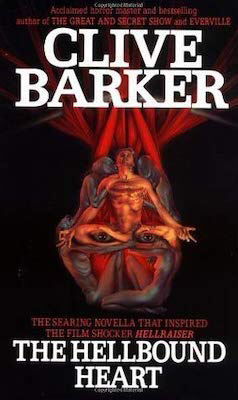 Frequent readers will know that I love my horror movies and that I’m constantly searching for new ones to enjoy. So you’ll understand why, back in 1987, when Hellraiser was released, I felt tempted to see it. Saw it I did. Since its tone was body horror rather than suspenseful horror, it wasn’t quite to my taste, but I still enjoyed it. Fast forward to this year and to my project to read several short novels. In searching for those novels, I came across Clive Barker’s The Hellbound Heart, the literary source behind the movie. Why not read it? Better yet, I discovered that I could borrow it on my Kindle from the local library. Since this was a new way to acquire and enjoy a novel, I gave it a try.

Clive Barker was born in Liverpool, England in 1952, but he now lives with his partner in Beverly Hills. When Stephen King read Barker’s Books of Blood, he dubbed Barker “the future of horror.” To fulfill that prophecy, Barker had made a big impact in all aspects of the horror and fantasy entertainment. As film director, producter, and screenwriter, he had given us several scary films, including the aforementioned adaptation of The Hellbound Heart and Candyman (1992). He had written several novels, including The Damnation Game (1985), the fantasy novel Imajica (1991), and the Young Adult series Abarat (2002-2011). He often illustrates his own novels. In 1990, he published a book of his illustrations entitled Clive Barker: Illustrator.

In moments they would be here–the ones Kircher had called the Cenobites, theologians of the Order of the Gash. Summoned from their experiments in the higher reaches of pleasure, to bring their ageless heads into a world of rain and failure.

The Hellbound Heart tells the story of Frank Cotton, who, as a hedonist, was in constant quest for new experiences. When he heard of the Lemarchand Configuration, a puzzle box that opens a doorway to a new dimension of pleasure, he sought it out and opened the box. But the Cenobites he met were not what he expected and their idea of pleasure proved to be torture. Dragged into this world of pain, he struggled to escape. Julia, Frank’s lover and his brother’s wife, helped him. Together they created new horrors.

I mentioned the 1987 movie above. No doubt, you know that was just the first of several Hellraiser movies. There had been ten movies; the last one, Hellraiser: Judgement came out last year. Though I enjoyed the first movie, I haven’t bothered seeing its sequels. Still they are popular and profitable. Since I’ve heard good things about Judgement, I imagine I’ll eventually see it. Along with the movies, The Hellbound Heart inspired the Hellraiser comic book series, part of Marvel/Epic Comics. Sometimes a literary work becomes a commodity in its own rights. Clearly, that’s the case here.

It seemed that when Frank appeared, once in a blue moon, from whichever corner of the globe he was presently laying waste, he only brought grief. His tales of adventures in the shallows of criminality, his talk of whores and petty theft, all appalled their parents. But there had been worse, or so Rory had said. In his wilder moments Frank had talked of a life lived in delirium, of an appetite for experience that conceded no moral imperative.

As a new and exciting way to acquire reading material, I borrowed The Hellbound Heart from the library on my Kindle. I loved this option. As I suspected, I enjoyed reading the novel, but it’s not one I feel a pressing need to own. Borrowing from the library was the right decision, and borrowing it on my Kindle meant it was always handy for reading when I had a few minutes to kill. But I also learned a lesson. I wished I had taken better notes. Since I can no longer access the novel on my Kindle–the loan expired–when it came time to write this review, I needed to refresh my memory about the book from reading the Wikipedia article. I would’ve preferred to read my own notes.

Like we expect from genre fiction in general, and horror fiction in specific, The Hellbound Heart is a page turning. It starts with a dramatic and violent scene, and it gives us several such scenes throughout its pages. High literature it is not, but it is entertaining and frightening. It’s exactly what we want from horror novels. If you like scary stories, The Hellbound Heart is for you.