Book Review: The Girl with All the Gifts by M. R. Carey

Home / Book Review: The Girl with All the Gifts by M. R. Carey 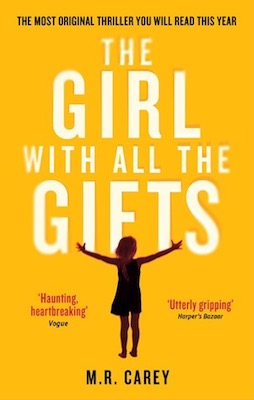 There’s a theory–I’m not saying I subscribe to it, but it’s out there–that you can judge the times by the horror stories it tells. In my childhood and youth, stories about ghosts and vampires–life after death–prevailed. Later it became the slasher and the serial killer. Today it’s zombies. Everywhere you turn around, you’re surrounded by zombies. They’re in our movies. They’re on television. They’re in our computer games. They’re in the news. The Pentagon has a strategic plan for the Zombie Apocalypse, as if it’s a matter of when rather than if. In the case of The Girl with All the Gifts, zombies are in our literature.

Why zombies? What does this say about our times?

In the study of literature, we’re always looking for the deeper story, the metaphorical story as well as the surface narration, but that is subject to interpretation. There is the metaphor the writer weaves into the story, but there is also the metaphor the reader draws from it. They might not be the same; in fact, as I’ve said before, a novel becomes more interesting when they differ. One test for a literary project is how many interpretations can you pull from it. We often divide fiction in genre fiction–written merely for entertainment–and literary fiction–written with layered meanings–but the division between them is at best arbitrary and at worst immaterial. There’s deeper meaning in even the most immature novels and short stories, and even the most pompous novelist writes what he believes will be entertaining to read. Skillful novels tend to find a balance between these labels. The Girl with All the Gifts enjoys that balance.

Set in the recognizable future–where soldiers carry assault rifles and drive Humvees, where scientists wear lab coats and stare into microscopes, where teachers stand before students and lecture about history and literature–The Girl with All the Gifts tells the story about a small group of survivors in the Zombie Apocalypse. When their refuge is destroyed by attackers, they have to flee south, through London, for the last human stronghold in England, Beacon. As to be expected, dangers, both human and zombie, lie along the route, and their private agendas threaten the unity they need to survive. It makes for a tense, page-turning thriller. It’s loaded with action, and M. R. Carey is skilled at describing that action. That’s the entertainment contained within the novel.

I like this novel as a science-fiction horror thriller. It has a solid plot, believable characters, and a logical narration. It tells the story through multiple points-of-view, including Melanie’s, the titular character. She prefers the name Pandora, because it means with all the gifts. Another point-of-view character is Helen Justineau, a teacher who wants to protect Melanie. Dr. Caldwell, a third point-of-view character, struggles to understand why people are turning into zombies in a hope to stop the epidemic. Sergeant Parks, who works to protect them, wrestles with an inner conflicts between duty and loyalty. The relationships between these characters feel authentic. It is those relationships that I liked best about The Girl with All the Gifts.

What about that deeper story, though? What about those questions I asked a few paragraphs ago? Why zombies? What does the Zombie Apocalypse say about us? This is the first zombie novel I’ve read, but in movies and on television, I’ve seen zombie infestation used to repression such things as drug addiction, the spread of aids, and the inhuman expectation towards conformity, but none of these themes satisfy me for The Girl with All the Gifts. Since I want you to develop your own interpretations, I won’t offer you mine, but I will say that Carey seems less interested in the zombies than in the humans they pursue. This novels isn’t about the monsters outside but about the demons inside. How do we face death? How do we face not the end of the world–because the world will continue–but the end of our existence on that world?

Born in Liverpool in 1959, M. R. Carey writes comic books and films as well as novels. The Girl with All the Gifts is the source for the 2016 movie of the same name. I read the novel with anticipation of seeing the movie afterwards. I intend to watching the film in the near future and review it for you. Please watch for that review in the coming weeks. As for the novel, The Girl with All the Gifts is a thrilling story about convincing characters in a dangerous situation. It works well as entertainment, but it also have compelling themes for those who like to dig deeper. In a phrase, it’s a good read.