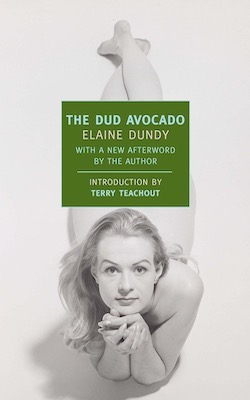 Everyone, at least every book lover, has their favorite bookstore. Though mine is Auntie’s Books in Spokane, many others living in the Northwest tell me theirs is Powell’s City of Books in Portland, Oregon. All my life I’ve been hearing about Powell’s, but I never visited, until a few years ago, when I took a day trip to Portland. Visiting Powell’s was high on my list of to-dos for that day. Once I entered it, it was obvious why many readers call it their favorite bookstore. It was an entire block of books, spread over two or three stories. Hours I spent browsing the shelves. I chose two or three nonfiction books to buy, and then I headed to the fiction section. I wanted an obscure novel by a writer I never heard about before. I wanted a novel that would never be assigned in a college literature class, but one that, perhaps, deserves to be. So vast was their fiction section that that search took over an hour.

The moment I pulled The Dud Avocado off the shelf, I knew the search was over. As naughty and superficial as it sounds, if you want to market your obscure novel to me, putting a picture of a naked woman on the cover helps. The picture, Lying Nude by Erwin Blumenfeld, feels more innocent than naughty; it promised a light-hearted novel. The synopsis on the back cover confirmed the comic tone. It sounded like just the thing I wanted. I read the first chapter or two on the train home, but once I got home, since I was already involved in other reading projects, I shelved The Dud Avocado. For years it sat on my bookshelf; every time I saw it, I reminded myself I wanted to read it. Finally in December, I pulled it off the shelf and read it.

The American abroad is a favorite theme in America literature. From Mark Twain’s The Innocents Abroad to Jay McInerney’s Ransom, it had been explored and developed by every generation of American writers. Hemingway explored it in The Sun Also Rises, and Fitzgerald gave us Tender is the Night. Henry James explored these theme in almost every novel he wrote, including my favorite James’ novel, The Portrait of a Lady. Each of these works reflect the mores and culture of their era. They provide a lens through which we can examine America values against those of other cultures. In this way, we can answer–in theory at least–what it means to be American. Of course, that’s a rhetorical question, but it’s not rhetorical because it makes a point or forms an argument. It’s rhetorical because there’s no true answer to it. Upon closer examination, we realize the real question is: What does it mean to be me?

That’s the question Sally Jay Gorce, the protagonist and narrator of The Dud Avocado, faces. She’s a young woman living the expatriate life in Paris. As a child, she had gone through a period of running away, until her rich uncle promised her that, if she stopped running away and finished school, he would pay for two years abroad. So she’s living in Paris on his dime, but now that she’s there, what should she do with that freedom?

I went to the window and looked out at the September evening. Though still hot with the vanished sun, the dusk, with its suggestion of autumn and nights drawing in, sent shivers of excitement up and down my spine. I thought of sex and sin; of my body and all the men in the world who would never sleep with it. I felt a vague melancholy sensation running through me, not at all unpleasant. If I could only figure out if it was Larry I was in love with, or just love, then I’d be all set, I told myself. It had certainly seemed to be Larry that morning, especially after that scene at the Dupont, but if I was so sure of it then, why not now?

This is a character novel. The plot exists, but it is loose and unstructured. It feels more like series of events rather than plot. The plot has its arc, its beginning, middle, and ending, and the way it ends depends on the way it began, so that series of events led to the natural climax in the novel. Like Fitzgerald’s The Great Gatsby, much of the plot is told in party scenes. Elaine Dundy, the writer of The Dud Avocado, shows great talent in describing these scenes. I always find party scenes hard to write, because so much happens in such short times, but most of it is insignificant, so finding the exact details that characterizes the party and drives the plot forward is challenging. Dundy rises to that challenge. Her party scenes were long, but I was never bored during them.

Sally Jay’s strategy for answering the question what does it mean to be me was a search for what crowd does she belong to. She joins this crowd for awhile, until she realizes she doesn’t quite belong with them, and onto the next crowd. She moves from one lover to the next, also in this search for belonging, this search for self. She’s a relatable character, who worries about the clothing she’s wearing–always inappropriate for the occasion–the color of her hair, and the touch of her make-up. She’s living a breezy life, and since she acts as her own narrator, she describes that life in a breezy style. Several passages in The Dud Avocado made me laugh.

But the novel has tragic undertones. As she describes her life in this self-mocking tone, we recognize that her lovers don’t really love her, her friends don’t really like her, and the man she most trusts does little to deserve that trust. To go into more detail would be a spoiler, but in the end, Sally Jay answers what it means to be herself. This is a novel of self-discovery. It’s her character arc, not the plot, that makes this novel worth reading.

Like Sally Jay Gorce, Elaine Dundy (1921-2008) lived the expatriate life in Paris in the 1950s. How much of Sally Jay’s story was Dundy’s I do not know. The novel feels autobiographical, but I never trust that. Part of a fiction writer’s job is to transform unstructured life into structured art, and to do that means taking poetic license with the material. At the very least, Dundy’s life in Paris allowed her to write about the city in detail. The local color in The Dud Avocado adds to the joy of reading it.

I always expect people to behave much better than I do. When they actually behave worse, I am frankly incredulous.

It was my goal in looking for an obscure novel to find a lost classic, a novel not assigned in literature classes but should be. In my review I mentioned Hemingway’s The Sun Also Rises and Fitzgerald’s Tender is the Night–novels that are assigned. The Dud Avocado is as good as either of them. It’s better than McInerney’s Ransom, but James’ The Portrait of a Lady remains my favorite America abroad novel. Still The Dud Avocado was everything I hoped it would be. It balanced comedy and tragedy well and gave us a beautiful novel about self-discovery.