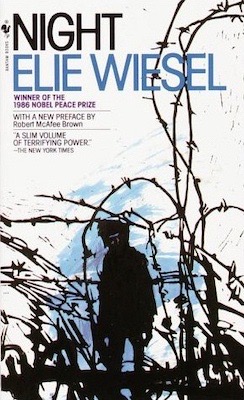 Around August 4th of this year, Elie Wiesel’s childhood home in Sighet, Romania was vandalized. The vandal spray-painted public toilet and Nazi Jew lying in hell with Hitler and Anti-Semite pedophile across the outside walls. Going through my news app, I spotted the headline, but I probably wouldn’t have read the article, because I’m not one to react to news of vandalism, even that involving anti-Semitic graffiti. But it happened the week when I was reading Wiesel’s Night. The news saddened me, but it also served to remind me about how tenacious hatred is in our world. A Holocaust survivor, Wiesel witnessed the murder of his family by the Nazi regime. That was in 1945, when the war was all but lost to Germany, with the Red Army advancing on the Eastern Front and America, English, and France armies in the West, but in Auschwitz and other death camps, the Nazis were still murdering Jews by the millions. That hatred persisted to our own times, when, two years after Wiesel’s death (July 2, 2016), a vandal tarnished Wiesel’s home. A lessor crime, no doubt, but one with the same motive–hate.

After the war, Eliezer Wiesel (1928-2016) settled in France, where he wrote a 900-page memoir entitled And the World Remained Silent. In 1955, he rewrote a shorter version, La Nuit, and published it in France. It was translated into English in 1960. His activities against racism won him the Nobel Peace Prize 1986. By then, he was living in the United States and teaching at Boston University.

I read Night as part of my survey in dystopian literature. Since it’s a memoir rather than novel, it’s an unusual book to include in that survey. As my readers know, I prefer fiction to nonfiction. But it’s an important inclusion, because it takes dystopia out of the realm of science fiction and fantasy and places it in the realm of history. Dystopia is not an abstract idea but a historical reality, one millions of people had suffered. And they’re suffering it still. The world is currently witnessing one of the worst refugee crisis of all times, because many countries around the world–via war, crime, governmental policies, or economic depression–have become hostile to people. They travel en masse to Europe and the United States, where they’re greeted not with open arms and material aid, but with suspicion and fear–with hate. Night stands as a cautionary work. It reminds us how far dystopian government will go when it establishes a dystopian agenda.

“Men to the left! Women to the right!”

Eight words spoken quietly, indifferently, without emotion. Eight short simple words. Yet that was the moment when I parted from my mother. I had not had time to think, but already I felt the pressure of my father’s hand: we were alone. For a part of a second I glimpsed my mother and my sisters moving away to the right. Tzipora held Mother’s hand. I saw them disappear into the distance; my mother was stroking my sister’s fair hair, as though to protect her, while I walked on with my father and the other men. And I did not know that in that place, at that moment, I was parting from my mother and Tzipora forever. I went on walking. My father held my hand.

At 109 pages, Night is one of the shortest books I reviewed on this blog, but it also stands as one of the hardest to read. Not for its prose. Its prose is simple and clear. The living nightmare that Night chronicles makes it difficult to read. At times, it’s comforting to know that what you’re reading is just made up. It’s fiction! As a memoir, Night offers no such comfort. This happened. The events Wiesel describes was his life. Like other Jews in Sighet, he was rounded up and transported to Auschwitz. Like them, he underwent several selections, including the first that separated him from his mother and sisters. He witnessed beatings and rapes, starvations and hangings, not as individual crimes, but as government policy. Many people, myself included, consider the Holocaust as the worst crime in human history. What comfort I find in Night is the comfort of distance and time, that it happened a long time before my birth, in a place half the world away.

Dare I find comfort in this?

Have we traveled so far? Had enough time passed?

On our Southern border of the United States, families are separated. Children are ripped from their parents’ arms. Like the children of Auschwitz, many will never see their mother’s again. There are those who object to comparing Donald Trump’s border policies with Hitler’s Germany. They remind us that the Holocaust ended one way and family separation ended another, but it’s a fallacy to compare the ending and say they are not the same. It’s more honest to look at the beginning and recognized that they began exactly the same way. Both began in hatred. Both began by identifying people who was somehow “lessor” than the rest of us, and therefore deserving the injustice we choose to inflict upon them. We as a nation raised our voices and in unison shouted NO! For that, I am proud of my country. But I still find shame in knowing that we were on a dark path, and I find discomfort in knowing that the man who set us on that path still leads this nation.

“I’ve got more faith in Hitler than in anyone else. He’s the only one who’s kept his promises, all his promises, to the Jewish people.”

Night serves to remind us of the human cost of injustice. It is too easy, in politics and elsewhere, to point to a group of people and call them “the others.” It’s too easy to offer scapegoats to the sacrifice. There’s something about the human psyche that makes us susceptible to hateful rhetoric. Adolph Hitler knew this and so does Donald Trump. Trump has began calling himself a Nationalist. When asked if he meant White Nationalist, he refused to answer. I fear in his refusal, we have our answer. In the build up to the 2018 Midterm Elections, Trump’s rhetoric against immigrants intensified. It motivated Robert D. Bowers to enter the Tree of Life Synagogue and murder eleven people–his own private Holocaust. Elie Wiesel had the courage to confront the dystopia of his time. He confronted it by using the written word, turning his experience into compelling literature. Will we have the courage to confront the dystopia of our time?