Book Review: House Made of Dawn by N. Scott Momaday 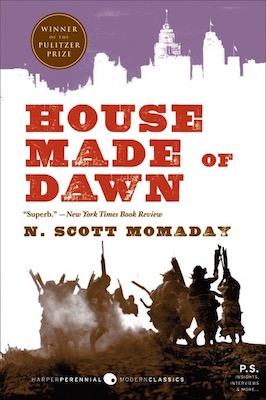 The European conquest of the United States began in 1492, when Columbus dropped anchor off the coast of an island he named San Salvador. Historians often date the end of the conquest as December 29, 1890, near Wounded Knee Creek, when US Cavalry opened fire on a Lakota camp. The government called it a battle, but history will record it as a massacre. We now recognize the dubious morality behind these actions, but once done they could never be undone. History seldom concerns itself with what is right or just. After Wounded Knee there must’ve been a first generation of Native Americans, youths born and raised to parents who remembered and perhaps continued to practice the old ways, but whose children had to make their way in an America that had been Europeanized. Where do these Natives, born ten to fifty years after Wounded Knee belong? On their ancestral lands, living a traditional life? In the cities, working in factories, eking out a living like men of all races? In the bars of skid row? Or on the battlefields of World War II? It’s doubtful that they felt at home anywhere. They were a generation lost to displacement.

Abel, the protagonist of N. Scott Momaday’s House Made of Dawn, represents this generation. Home from World War II, where his battlefield experiences had left him with what we now call PTS, he returned to the canyon where he had grown up. Childhood tragedy had caused him to be raised by his grandfather, and it’s to this old Kiowa he returns. The grandfather, Francisco, had taught Abel the old ways, but war and modern society had damaged him. Having failed the homecoming, Abel moves to Los Angeles where he suffers further alienation. Where does he belong? On the reservation? In the city? Perhaps in the answer to this basic question, he seeks the answer to an even more fundamental one.

If my plot synopsis feels abstract, please know its fits the material. At its heart, House Made of Dawn is an existential novel. To develop his theme of displacement, N. Scott Momaday wrote an experimental novel. As Abel struggles to find his place in society, the reader struggles to make sense of the various disjointed passages he’s reading. Don’t let that discourage you, because form and function work together to create a novel that is both beautiful and inspired. My synopsis is abstract, but Momaday’s prose is not. It’s lyrical, even poetic, but it is also sensual. As I read House Made of Dawn, I realized I was reading some of the best descriptive passages I’ve seen in years. And as Abel seeks both the past his grandfather had lived and his place in post-war America, Momaday combines both Native American traditions and the European literary practices to write a novel that feels truly American.

Like Abel, Navarre Scott Momaday, would’ve been part of that first generation of Native Americans born within fifty years after Wounded Knee, on February 27, 1937, in Lawton, Oklahoma. His family later moved to Arizona. His father was a full-blooded Kiowa, and his mother was a Cherokee mixed with English, Irish, and French ancestry. Living in Arizona exposed him not only to the traditions of the Kiowa, but also to the Navajo, the Apache, and the Pueblo traditions. He received his bachelor degree at the University of New Mexico and his doctorate at Stanford University. He would later teach at Stanford, as well as at the University of California-Berkeley, where he designed the graduate program in Indian Studies. House Made of Dawn won the Pulitzer Prize for Fiction in 1969. In 2007, President George W. Bush awarded Momaday the National Medal of Arts.

Published in 1968, House Made of Dawn is considered the first work of the Native America Renaissance that includes such works as Leslie Marmon Silko’s Ceremony, James Welch’s Winter in the Blood, and Louise Erdrich’s Love Medicine. It’s an experimental novel that explores the important themes about identity, place, and displacement. Though we recognize Abel is not a heroic character, we recognize that, like Odysseus, he’s on his own heroic quest. He’s a sympathetic character. We leave the novel hoping that he finds that inner peace we all crave.