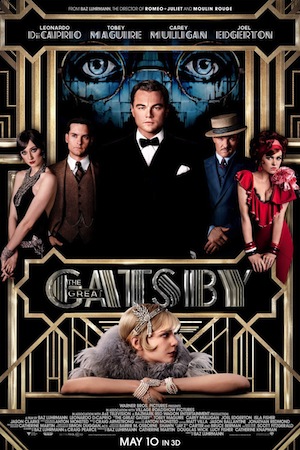 I wanted to hate this movie!

In fact, I expected to hate it. When I heard they intended to give the Hollywood treatment to The Great Gatsby, I cringed. Chills chased down my back. I went into paranoid denial: No! No! Please say it ain’t so!

My doubts increased when I heard that Leonardo DiCaprio would play the title character and Tobey Maquire—Spider-Man?—would play the narrator, Nick Carraway. Please understand my aversion to these performers. I have enjoyed several of DiCaprio’s movies, and what I hated about the Spider-Man movies had nothing to do with Maquire. But having read The Great Gatsby five times, I had a vision in my head about what Gatsby and Carraway looked like and how they behaved, and DiCaprio and Maquire didn’t match these images.

But I didn’t hate this movie—far from it. In fact, I enjoyed it. Enjoyed, not loved. It is not a great movie. At the end of this year, when I look back at the movies I’ve seen, I don’t expect The Great Gatsby to be among my list of the ten best movies of the year, but it was far from the artistic misjudgment I expected. It is a good movie; it is worth seeing.

Directed by Baz Luhrmann (Strictly Ballroom, Romeo + Juliet, Moulin Rouge!), The Great Gatsby is faithful to the novel. Nick Carraway narrates the tale of Jay Gatsby’s efforts to rekindle his love affair with Daisy Fay (Carey Mulligan), who was now married to Tom Buchanan (Joel Edgerton). If you know the plot in the Fitzgerald novel, then you know the plot in the movie. Luhrmann made a few minor changes for the sake of narrative flow, but the plot remained uncorrupted.

Though the movie is faithful to the plot, the tone is much different. The tone of Fitzgerald’s novel is reflective, as Nick Carraway narrates the events he witnessed on Long Island and details how they changed his opinion of the people involved, the society they lived in, and even the nature of the American Dream. This reflection exists in the movie, as Carraway, now a patient in a sanatorium—having suffered a breakdown, presumably caused by the tragic contest he had witnessed in Gatsby’s realm—writes, as part of his therapy, the book he would call The Great Gatsby; however, this reflective tone is overpowered by the bright, vibrant, and colorful sounds and sights of Gatsby’s parties. Film is a visual story-telling medium, and the most visual elements of this story is the glitter and glitz of Gatsby’s mansion. The costumes, the settings, the cars, and the cast—the movie is beautiful. It is easy to imagine someone enjoying this film just for its photography. Unfortunately, Luhrmann ruins this beauty with a soundtrack that is too loud and too modern for the period.

What was he thinking?

“While we acknowledge,” Luhrmann writes, “as Fitzgerald phrased it, ‘the Jazz Age,’ and this is the period represented on screen, we—our audience—are living in the ‘hip-hop age’ and want our viewers to feel the impact of modern-day music…” Politicians call this spin; I call it lying. Why would he go through such great lengths to recreate the 1920s in costume, in setting, in hairstyle, even in dialogue—much of it lifted directly from Fitzgerald’s novel—and then destroy that illusion with hip hop music? This anachronism is the biggest weakness in the movie. The fundamental function of a movie, like that of a novel, is to tell a story. This requires submerging the viewer in the story, but the soundtrack prevented that submergence. Luhrmann claims it was part of his artistic vision, but the cynic in me believes it was a concession to the money people: We need tracks to sell on iTunes!

The acting was competent but not remarkable. For the spell of the movie, Leonardo DiCaprio was Jay Gatsby, Carey Mullingan was Daisy Buchanan, and Joel Edgerton was Tom Buchanan. And Tobey Maquire? Maybe the problem I had with Spider-Man was Tobey Maquire. He seems to have a certain coil in his lip—a sneer, if you will—that undermined every line. In another actor, it would’ve come across as ironic or cynical or sarcastic, adding subtext and tension, but in Maquire, it came across as insincerity, as if he were shrugging his shoulders to say: Look, I’m just an actor in a movie. It’s not real, you know! A pleasant surprise was Elizabeth Debicki as Jordan Baker. Though she had a small role, she came across as the most authentic “flapper” in the movie.

As I was leaving the theater, I texted a friend who I knew was excited to see the movie: Gatsby is worth seeing. I believe those words sum up my opinion of the movie. Though it does not warrant the year-long hype it received, it is a fun, enjoyable movie to watch. I spent the extra money to see it in 3D, but I would advise against that. I would also advise those who had not read the novel to read it prior to seeing the movie, and those who had read the novel “years ago in school ” should reread it now. Let your imagination write the film before submitting yourself to Luhrmann’s vision.