At the Movies with the 7 Deadly Sins

Home / Movie Adaptations • Movie Review / At the Movies with the 7 Deadl ... 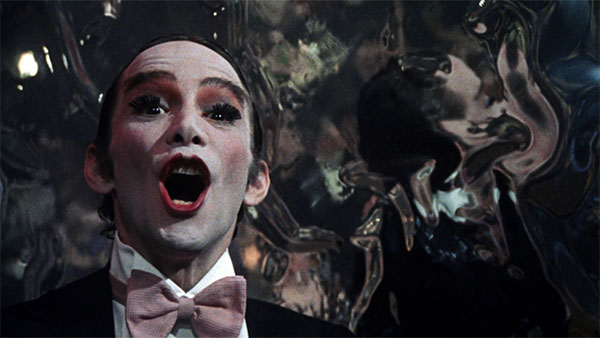 Are you ready for a taste of sin?

Perhaps you’re a goody two shoes who fear your straight life makes your a bore. Or perhaps you suffer repressed urges that makes you tense and irritable. Or perhaps you’ve hidden away decadent traits so long that you know they’re about the burst free, at the wrong moment, in front of the wrong people, ruining your good reputation. For whatever reason, you are ready for a vicarious release of inner demons.

Those who count such things tell us there are seven deadly sins. In the following list, I chose one movie to represent each one. In these movies, the characters give into these sins and suffer the consequences. Somehow popcorn and soda doesn’t feel right for these sinful films, so uncork a bottle of wine and make a cheese tray. And then sit back and sin. 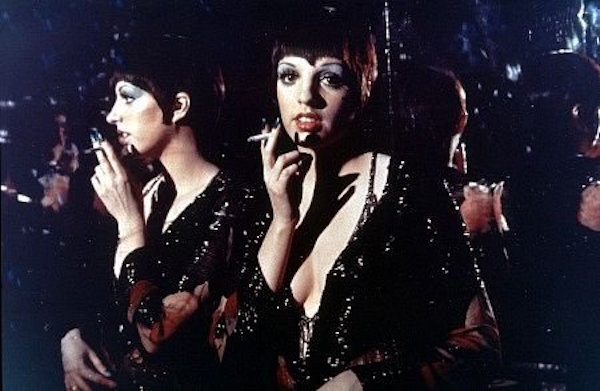 Set in Berlin in 1931, at the beginning of the Nazi rise to power, Cabaret follows Sally Bowles, a cabaret singer, as she struggles to seek fame and fortune. Since she wears black lingerie and silk stockings on stage, you might believe this is a story of lust. Though lust pays its role in Sally’s story, as does greed, Sally’s fatal flaw is pride. It drives her into love affairs with Brian Roberts and Maximillian von Heune. It drives her to make up stories about her perfect father. But most of all, it drives her to the stage. When she has to choose between her future happiness or fame, she chooses fame.

Liza Minnelli delivers her legendary voice to such songs as “Maybe This Time” and “Cabaret.” But she’s not the only singer in the cast. Joel Grey’s “Wilcommen” is iconic. During the most moving moment in the movie, at least for me, Mark Lambert sings “Tomorrow Belongs to Me.” He sings it a cappella, giving it beauty and grace to what proves to be a tense and tragic turning point in world history.

Cabaret is a beautiful movie, arguably my favorite musical. It’s one of those movies where everything–the writing, the directing, the photography, the acting, and the music–comes together to create a masterpiece. 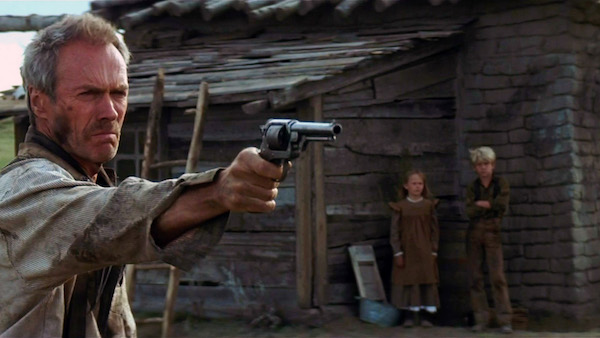 After seeing Unforgiven for the first time, I thought: That’s the movie Eastwood has been wanting to make since Dirty Harry. It seems everything he had done before has added up to make Unforgiven, and everything he has done since has lived in its shadow. It is my favorite Western, but it is also my favorite Clint Eastwood movie. Since Eastwood doesn’t make bad movies, I think that’s saying a lot. He both starred in and directed this movie.

As it often does in the real world, wrath manifests itself in this movie as a desire for revenge. When an angry customer beats up a prostitute at the local whorehouse, her fellow prostitutes raise money to hire a gunman to come and kill him. Recruited by a young gunman wanting to make a name for himself, Bill Munny, a retired outlaw, picks up his gun to collect the bounty. What follows is a dark and angry drama played out with fowl words, fists, and, yes, guns. Munny is a man struggling to hold things inside, those negative emotions and impulses we all suffer. For much of the movie, we suspect that it’s guilt over his past murderous behavior, but in the final reel, we learn it is wrath.

Fights, especially gunfights, are the set pieces of Westerns, and Unforgiven delivers. But these are not your grandfather’s gunfights. These are not the gunfights of the white-hatted sheriff meeting the black-hatted outlaw at high noon on the dusty main street. These are the gunfights as they must’ve really happened–planned murders. They aren’t about who is the quickest draw but who can get the drop on his foe. This is a brutal and gritty movie–full of wrath. 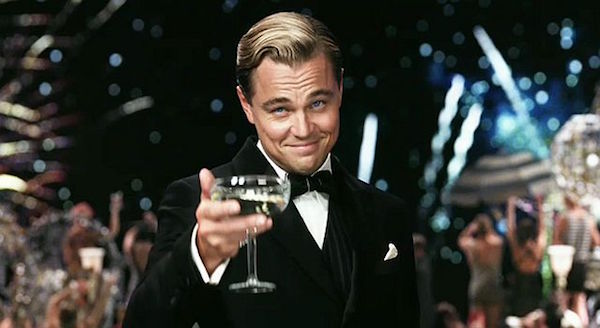 Keeping up with Jones isn’t just an American cliché; it’s an American compulsion. We all want what the other guy has. Maybe it is the latest technological device or the fastest car or the most glamorous woman. Jay Gatsby is no stranger to envy; in fact, it beats through his heart like blood. Not only does he envy Tom Buchanan’s marriage to Daisy, but he also wants Buchanan to reciprocate this envy. So he buys the biggest house, drives the most exotic car, and wears the most beautiful shirts. He hosts massive parties, intended to be the envy of everyone living in the Greater New York area, including Buchanan. During one of the most decisive scene of the story–both the novel and the movie–in an effort to transfer his envy to his rival, he goads Daisy into confessing she had never loved Buchanan.

Fitzgerald’s The Great Gatsby is the quintessential American novel. No movie can do it justice; no movie can hope to live up to its perfection. For that reason, it is best to judge Baz Luhrmann’s The Great Gatsby on its own terms rather than to compare it to the novel. It is faithful to the novel in plot and character, but its tone seems off. It’s a vibrant, bright movie, full of fascinating visuals and colorful sets. It is a movie told in parties–the grand parties hosted by Gatsby and the sedate parties hosted by Buchanan. Unlike Gatsby (new money), Buchanan (old money) has nothing to prove. He’s as devoid of envy as Gatsby has it in abundance. 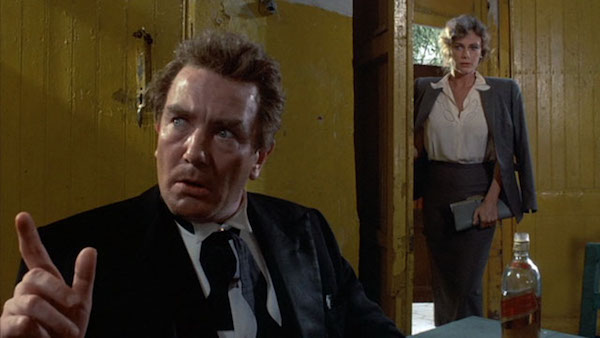 Without a doubt, Under the Volcano is the most depressing movie on this list. But what else would you expect for sloth? Based on the novel by Malcolm Lowry, it follows the last day of life for Geoffrey Firmin, a British expatriate living in Mexico. Sloth is surrender, and Firmin surrenders to the bottle. Is it a good story to follow a man from one drink to the next? From one drunk to the next? In the course of the day, Firmin drinks himself sober, only to drink himself drunk again. Meanwhile, his ex-wife and brother follow him. They struggle to keep him interested in life, in recovery, in reconciliation. Most of all, they struggle to keep him sober.

Lowry’s novel is written in stream-of-consciousness, a literary style that doesn’t translate to film. But with Finney’s performance, you sense that stream-of-consciousness working inside him, haunting him, driving him to drink, and driving him to flee the very people who loves him. This is a heartbreaking movie that will drive you to both tears and anger. It’s the type of movie we watch only once, not because it’s bad, but because it is so true our own experiences with lost souls. But after seeing it that once, we will want to see it again. Only this time with a more hopeful ending. 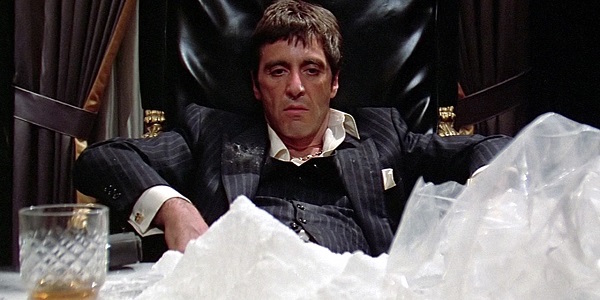 Who can forget that image of Tony Montana burying his face in the mountain of cocaine on his desk? Though we tend to attribute gluttony as over eating, its true nature is not knowing when enough is enough. Its overindulgence in anything consumed. (Of course, I would argue with cocaine, even one line is overindulging.) But Montana doesn’t want just one line; he wants it all. All the women. All the wealth. All the power. All the glory. Most of all, all the cocaine.

In such movies like The Godfather Trilogy and Carlito’s Way, Pacino has made small career playing the gangster who wants to go straight, but in Scarface he plays the opposite character, the nobody who strives to become the most powerful gangster. This is a rise-and-fall story, a Macbeth for the modern world. It shares many of the same plot points with this Shakespearean masterpiece, from Montana’s first claim of glory, to his rise of favor with Lopez (the king), to the killing and usurpation of that king, and to his ultimate downfall. I spoil nothing of the plot; even if you’ve never seen Scarface, you know how it ends.

Life’s but a walking shadow, a poor player

That struts and frets his hour upon the stage

And then is heard no more. It is a tale

Told by an idiot, full of sound and fury.

At least towards the end, Macbeth understood the folly of his decisions, something Montana never did. In Scarface, there is overlap with the other sins. Montana is both greedy and full of wrath. He envies Frank Lopez’s life and lusts for his woman. But it is that scene of him snorting cocaine from a pile on his desk that best foreshadows his downfall. It wasn’t the Columbian cartel that killed him. It’s gluttony that killed the beast. 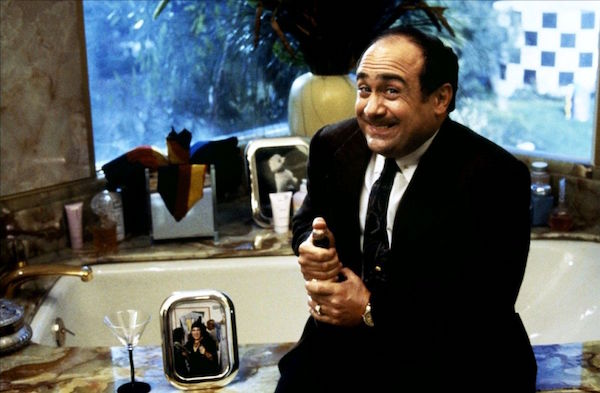 There are so many movies that deal with greed that this was hard sin to decide. I thought about Wall Street, with Michael Douglas’ Gorden Gekko telling everyone that greed is good. Or what about Erich von Stroheim’s 1924 Greed. I mean its title is greed! More modern there’s The Wolf of Wall Street, Boiler Room, or There Will Be Blood. Almost every gangster movie is about greed, as is every heist movie. But with this list including such depressing movies as Unforgiven, Under the Volcano, and Scarface, it needs some comic relief. Hence, Ruthless People.

In order to get control of his wife’s fortune, Sam Stone plots her murder. Before he can carry out his murderous intentions, kidnappers kidnap his wife. If he fails to pay the ransom, they promise to kill her. Problem solved, right? But the kidnappers, Ken and Sandy Kessler, are not ruthless people. A comedy of misunderstanding, errors, and duplicity follows. At times the humor is subtle; at other times, it’s overt. Either way, the laughter will burst from you so hard your belly will burn.

As Minnelli is a beautiful singer, and Eastwood and Pacino are great dramatic actors, Danny DeVito is a great comedic performer. In many way, this list is a list of actors playing to their strengths. And DeVito’s strength is the rogue motivated by greed. 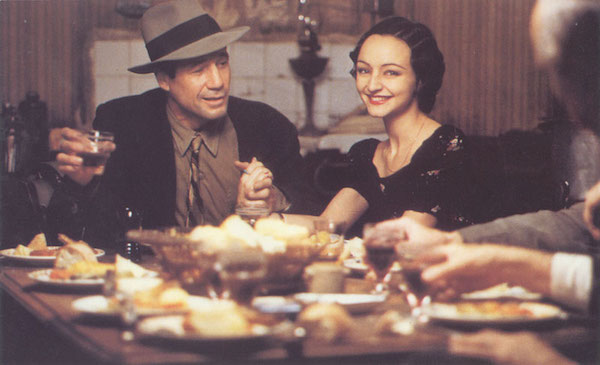 Director Philip Kaufman did more than tell a story of a love affair. He recreated bohemian Paris of 1931. Like Cabaret, this is a movie that lives in the shadow of approaching war, and like Cabaret, it is a story of characters doing its best to ignore that crisis. They write novels, dance in nightclubs, and gather around wooden tables in smoky rooms and talk and drink wine and talk some more. But it is also a story about a love affair, a dual infidelity, since both Nin and Miller are married to others. Despite this, they give in to their mutual lust and suffer the painful consequences.

Henry and June created its own movie rating, NC-17. No children under 17. There was too much sex and nudity for a R rating, and not enough to justify a X rating, so MPAA created the new rating. One reason to watch this movie is the photography. Philippe Rousselot was the cinematographer, and in 1991, the was nominated for an Oscar for Henry and June. But the main reason to watch it is to vicariously fulfill your lust.