As I mentioned before, I suffered a heart attack at the end of March. That and other concerns had played havoc with my normal routine. As a result, I didn’t watch as many movies this month as I normally do. In fact, most of the movies on this list are movies I saw in March, prior to my heart attack. For various reasons, I recommend all five movies listed below. It’s an odd mix that includes a couple modern thrillers, a couple classics, and an often overlooked movie by one of today’s biggest stars. Though I recommend all of them, I’ll list them in ascending order from the weakest to the strongest recommendation. 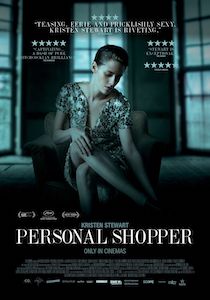 Kristen Stewart has a bad reputation for being a wooden actress. In YouTube videos and elsewhere, she’s often panned for her inability to emote. Is her expression sorrow, love, grief, anger, or indifference? How do you tell the difference? I think she’s having trouble establishing herself in post-Twilight Hollywood. This struggle means she’s taking roles that other actresses might reject. In 2012, she starred as Marylou in On the Road, adapted from Jack Kerouac’s novel. It’s an interesting movie that I half liked, half hated. I don’t blame Stewart for that; the novel is a difficult source for filming. Still, the movie had a beautiful Jazz-dancing scene that’s its most memorable moment. Anyone who saw that scene will have evidence that Stewart is perhaps more talented than reputed.

Her role as Maureen Cartwright in Personal Shopper (2016) is another odd choice. The movie begins with a long scene–maybe too long–of her walking through a house, saying “Lewis.” He’s her twin brother, now deceased, and this is the house he built. Does his ghost haunt it? The title refers to her career as the personal shopper for Kyra, a famous fashion model. The film has a split personality. As she hunts for her brother’s spirit, she goes about her day-to-day duties of shopping for clothing. The connection, of course, is Maureen. This is a very personal story, a psychological thriller, and Stewart’s quiet style makes her the right choice for the part.

Written and directed by Olivier Assayas, Personal Shopper is a slow-paced movie. It’s hard to film someone’s inner world, but Stewart and Assayas somehow captured Maureen’s inner world. More remarkable, they did it without voiceovers. It’s an unsettling movie. I know it’ll be a movie I’ll watch again and again. It’s available on Netflix Instant Play. 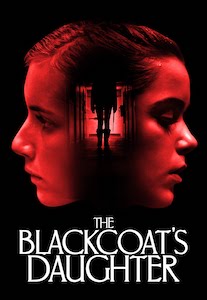 Talk about unsettling movies brings me to The Blackcoat’s Daughter. I learned about this movie by watching a YouTube video about overlooked horror movies available on Netflix Instant Play. Since I constantly looking for fresh horror movies that break away from the same-old clichés, I decided that to watch it. Glad I did! The Blackcoat’s Daughter is a dark, inventive psychological thriller with supernatural themes.

When a private school breaks for a holiday, the parents for two students failed to pick them up. Left with no choice, the headmaster grants them permission to stay in school housing for one more night, until the parents can be contacted to pick them up. What a fateful decision that proved to be! This is an enigmatic movie, a movie that feels no compulsion to answers all your questions about what’s happening or why. Those unanswered questions make it even more unsettling, more frightening, more gripping. The macabre images stay with you. And the one thing that’s certain is this: The body counts mounts!

Lucy Boynton and Kiernan Shipka stars as Rose and Kat, the two students. Emma Roberts plays Joan, a mysterious woman whose journey connects with the school in a surprising twist. Oz Perkins wrote and direct The Blackcoat’s Daughter. February is an alternate name, but it’s available on Netflix Instant Play as The Blackcoat’s Daughter. If like me, you love innovative horror movies, you’ll like this one. 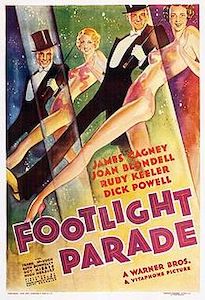 I’m currently researching pre-code Hollywood. The Production Code, also called The Hays Code, was Hollywood’s first attempt at self-censorship. It went into effect in 1931, but no one enforced it until 1934. So 1933’s Footlight Parade is considered one of the last pre-code movies. It’s a musical starring James Cagney and Joan Blondell. Among the scenes allowed in 1933 that would’ve been cut in 1934 was a visit to an opium den, where scantily clad women ingested the narcotic. The Production Code forbade scantily clad women, and it wasn’t a big fan of opium consumption either.

Though I watched Footlight Parade for a taste of what pre-code Hollywood offered, as part of my research, it’s not the only or even the best reason for seeing the movie. It’s an entertaining watch! Cagney plays Chester Kent, a theater producer who feels threatened by the growing film industry. Since he needed to continue making money, he and his partners founded a company that produces prologues. These are musical numbers that theaters can show their film-going public prior to the movie. This plot creates a vehicle for witty one-liners and entertaining musical numbers. It also allows the filmmakers to satirize the coming Production Code. A lawyer keeps reminding Kent of what can and cannot be shown on stages at various localities around the United States.

There are three big musical numbers. Harry Warren and Sammy Fain composed the music; Al Dubin and Irving Kahal wrote the lyrics. These numbers are the best reason to see Footlight Parade. Cagney stars in one of them himself. Though the modern audience remembers him mostly for his gangster characters, as seen in films like Public Enemy (1931) and White Heat (1949), he began his performing arts career as a dancer. Footlight Parade gave him the opportunity to show off that footwork.

Lloyd Bacon and Busby Berkeley directed Footlight Parade. I watched it from a DVD from Netflix, but iTunes and Amazon Video have it available for rent for $2.99. If you love Classic Hollywood, James Cagney, or musical comedy, then I bet you’ll love Footlight Parade. 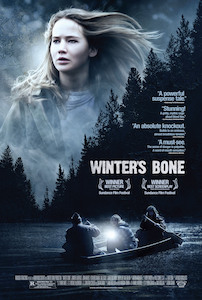 Before she was Katniss Everdeen in The Hunger Games (2012), Jennifer Lawrence was Ree Dolly in Winter’s Bone (2010). I make this observation not just to illustrate her career arc, but also because there are similarities between Katniss and Ree. Both are tough, backwoods women who take no shit from anyone. They face different dilemmas, different antagonists, but both fight against the established power. It’s not hard to imagine that the filmmakers behind The Hunger Games decided to cast Lawrence after seeing her in Winter’s Bone.

When Ree’s father goes missing, she has to find him. He’s out on bail and must face trial. Since the land where they live is collateral for the bail, if he fails to appear, the Dolly family will lose it. I love that this movie establishes a clear goal–find her father–and the motivation behind it. It does that in the first scene, and it creates instant sympathy for Ree. One might think of it as a mystery, but it’s more of a quest. Outward, Ree searches for her father, but inward, she’s learning who she is, what she’s made of, and–most importantly–what she believes in. I have used the word unsettling a couple times in this post. Winter’s Bone is also unsettling, but for a different reason than Personal Shopper or The Blackcoat’s Daughter. This is a tense, realistic human drama.

Daniel Woodrell wrote the novel. Debra Granik and Anne Rosellini adapted it into the screenplay. Granik also directed it. I think Lawrence is one of the most talented actresses in Hollywood. Winter’s Bone is worth seeing as an early example of that talent. It’s available on Netflix Instant Play. 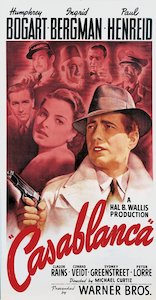 “I wouldn’t bring up Paris if I were you. It’s poor salesmanship.”

A part of me wants to save this film for a full review later, but I don’t see a point in that. What can I say about Casablanca that hasn’t already been said? This is Humphrey Bogart and Ingrid Bergman at their best, arguably, in their most iconic roles. If you haven’t seen this movie, there’s a good chance that you don’t really exist, that you’re just figment of someone’s imagination. Whose, I wonder. Mine? Yours? Does it matter? And if you have seen it but haven’t seen it for years, it’s time to see it again.

Casablanca is a port city in Morocco. During the early years of World War II, it was a place where refugees went to wait for papers for emigrating to England or America. Rick (Bogart) obtained such papers. When his ex-lover, Ilsa (Bergman) arrived with her husband, Victor Laszlo, she tried to convince Rick to give them the papers for transport away from the Germans, who wanted to imprison Laszlo. It’s a tense, political thriller. It’s a bitter romance. It’s a moody drama.

Julius J. Epstein, Philip G. Epstein, and Haward Koch wrote the screenplay. Michael Curtiz directed it. I bought it through iTunes, but I’m sure there are dozens of ways to watch it online or via other services.

“I’m shocked, shocked, to find that gambling is going on in here.” 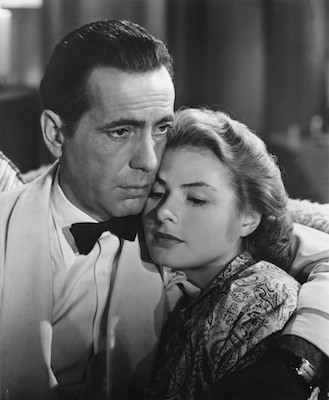