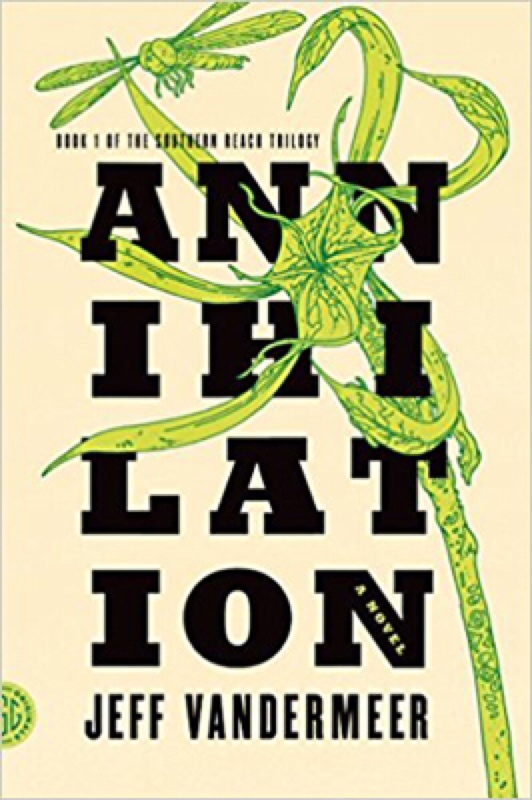 Unfortunately at the movies last weekend, I saw the trailer for the upcoming movie based on Annihilation. Since I wanted to review the novel before I knew a lot about the movie, I’ve been avoiding the trailer. But it played at the theater, and since it would’ve been silly for me to leave as it played, I ended up watching it. This is particularly unfortunate, because, though I read the novel in anticipation for the movie, after reading the book, I debated whether I would see the movie. I mean this not as a condemnation but as a praise. Since Annihilation by Jeff VanderMeer is so original and imaginative, I didn’t want the movie to interfere with my understanding of it. But when I saw the trailer, the movie already started that disruptive process.

I believe a novel is a collaboration between the writer and the reader. I came to that conclusion after performing an experiment that I read in a writing book. The experiment was simple but telling. I chose a scene from a novel I had read and wrote down everything I could remember of it. I read the scene again, but I discovered I remembered far more details than were written on the page. Only about fifty percent came from the book; the rest came from me. I suspect that if I were to perform the same experiment with Annihilation, I would discovered my contribution was more like seventy-five percent. This is a testament to the trust VanderMeer has in his readers and in his ability to evoke our imagination, but it’s also a reflection of the fertile setting he created with Area X–fertile for the animals and vegetation that live in it, but also fertile for the human imagination.

Four women, identified only by their job titles–a biologist, a psychologist, an archaeologist, and surveyor–entered Area X for an ill-defined exploration mission. There had been other explorations before them–ill-fated–and they presume that there will be other explorations after theirs. But something had happened in Area X, and humans needed to determine what it was, because Area X was growing, transforming the world, and our survival depended on understanding and controlling what was happening there. They were sent by a quasi-governmental entity called the Southern Reach, and the psychologist led them. As the biologist–the narrator and protagonist–told the story, it’s clear that both the Southern Reach and the psychologist had an agenda unknown to the others.

Some novels are about the plot and others are about characters–most, in truth, are driven by both–but Annihilation is about the setting. Area X is a coastal strip where humans used to live but now do not. There is a lighthouse and abandoned towns, but there is also the base camp, set up by the past missions, that becomes the focal point of their exploration. There’s a hole in the ground that the narrator, at the protest of the others, insists on calling a tower. What man abandons, nature reclaims, but this is a stranger nature, a wilderness occupied by new and old species, an ever-changing, ever-evolving landscape, a dangerous place for humans, dangerous for both our physical well-being and our mental health.

In saying that Annihilation is about setting more than plot or character isn’t to say either are unimportant. Since it’s told in the first person from the biologist’s point-of-view, we get to know her well and learn to sympathize with her. And through her, we glean facts about the other characters, but due to both events in her backstory and events in the novel, we have to question her reliability. As a biologists, she’s the prefect character to describe the rich ecosystem they discover in Area X. As for the plot, it’s a page turner. Annihilation works as a fantasy novel, because it feels as if something magical is taking place in Area X, but it also works as a science fiction novel and as an adventure.

According to Wikipedia, this merging of genres is one of Jeff VanderMeer’s signatures. Born in Bellefonte, Pennsylvania on July 7, 1968, he began writing and publishing even as a high school student. In the 1990s, he joined the New Weird movement, with literary types that included K. J. Bishop, Ian R. MacLeod, and Justina Robson. He crossed into mainstream attention with his Southern Reach trilogy, of which Annihilation is the first installment.

Though part of a trilogy, Annihilation reads as a completed novel. The conflicts introduced during this novel are resolved in it. There was no cliffhanger endings. Lingering questions, yes, but no dramatic action that incites me to rush out and buy the next book. I like that, because I want time to let this novel sit on me. To soak in, if you will. That’s the reason I’m uncertain if I want to see the movie. I’m sure I’ll eventually see it, but this is a novel that doesn’t lead well to adaptation, and from the trailer I saw, it’s clear they changed many things to make it film-worthy. I want to remember Annihilation for what it is rather than what Hollywood makes of it.

Whether you intend to see the movie or not, I recommend you visit Area X first in Jeff VanderMeer’s Annihilation. It’s a tense, suspenseful novel, filled with action and adventure, but it also creates a dramatic, imaginative world.