A Game of Thrones by George R. R. Martin 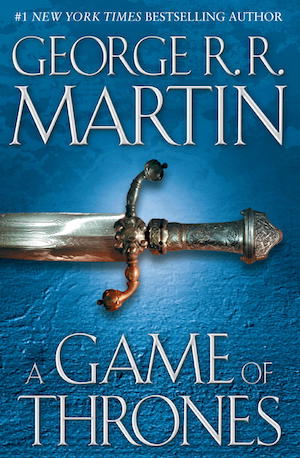 Why read the book?

Why, indeed, when you have the HBO series to watch? It’s a popular series, now in its 5th season, and it has a lot to recommend it. Well-written dialogue. Dramatic performances by Sean Bean, Lena Headey, Kit Harington, and too many others to name. Let’s face it, watching Peter Dinklage play Tyrion Lannister is reason enough to watch the series. But add to that performance gory violence, exciting visual effects, a fully developed fantasy world, and enough nudity to sate a pornographer’s appetite, and you have the makings of a hit series. So why read the book, when turning on the television is both easier and faster?

Let’s face it, the books are monsters in paper. A Game of Throne, the first novel of George R.R. Martin’s Song of Ice and Fire series, is 864 pages long in the paperback version. Who has time to read that many pages? Well, I do. I have the time, because I make the time, and I encourage you to also make the time. As Tyrion Lannister said, “…a mind needs books as a sword needs a whetstone…” If this blog has any theme, any purpose beyond my writing for public reading my opinions of various novels, movies, and shows–what ego I must have to think the public cares what I think–that purpose is to convince said public to spend more time reading. If for only an hour a day, turn off the TV, put away the computer game, and quite browsing YouTube videos, and pick up a book and read. What book you choose to read is up to your own taste, but you could do far worst than choose A Game of Thrones.

Though I distrust the term born writer, George R.R. Martin comes close to being one. Born in 1948, he grew up in Bayonne, New Jersey. Limited in territory, he traveled in his mind. He watched the cargo ships sailing into the Kill Van Kull, researched their flags and nations of origins in the encyclopedia, and imagined what it would be like to travel or live in those countries. He began writing stories early and sold them to the neighborhood children. In this way, he developed and refined the imagination that would define his work. In the 1970s, he taught at Clark University, but in 1979, after the death of a friend, he reevaluated his life and his goals. He quit the university to become a full-time writer. He worked in television, helping to develop Max Headroom and writing scripts for Twilight Zone and Beauty and the Beast. But he wanted to write novels, and in 1991, he began writing the Song of Ice and Fire series. A Game of Thrones, published in 1996, is the first novel of this series.

A Game of Thrones explores power, its seduction, its corruption, its purpose in civilization. The motivating conflict in this novel is Who should rule Westeros. Often in history and fiction, the death of a king incites a succession crisis. When Robert Baratheon, king of Westeros died, such a crisis erupts in the Seven Kingdoms. This crisis becomes a battle between two families–the Starks and the Lannisters.

Martin chose to tell this story in the point-of-view of eight characters effected by the crisis. At the heart of the story is the Stark Family. They rule over the north, where the land is harsh and the winters are long. When Jon Arryn, the hand of the king, died a sudden and suspicious death, King Robert recruits Lord Eddard Stark to replace him. Stark heads to King’s Landing, the capital, with the duel purpose of serving as Robert’s hand and investigating Arryn’s death. His wife, Catelyn, remains in Winterfeld to help their oldest son serve as acting lord and to care for their middle son, Bran, who had suffered an injury. Eddard, or Ned as he’s often called, takes his two daughters with him to King’s Landing. Sansa, betrothed to the king’s son, Joffrey, dreams of the day when she will be queen of Westeros. Arya, a tomboy, prefers playing with swords. Meanwhile, Ned’s bastard son, Jon Snow, heads to the Wall that guards the kingdom from the Wildings who live north of the Wall. En route, he’s befriended by Tyrion Lannister. In the backstory, King Robert had won the crown from Aerys Targaryen in a civil war. Daenerys Targaryen and her brother, now live in exile across the narrow sea, but they plot their own conspiracy to reclaim the lost throne.

Since each of these point-of-view characters have his or her own goal, A Game of Thrones reads like eight novels rolled into one. The eight plots weave together to create the umbrella plot concerning the succession crisis and the civil war it incites. Though ambitious and epic, Martin tells the story with skill. Sometimes it’s hard to keep track of all the characters. One day, as I read in a lounge, my waitress looked over my shoulder and said, “Oh, you’re reading A Game of Thrones. I started it once, but all the characters confused me. I couldn’t remember who was who.” It is an inherent weakness in a work with a broad scope. And the difficulty of remember who’s who and why he or she is important to the plot is the novel’s greatest weakness. In a way, it’s like reading a history textbook, with all the names and events–both grand and small–to remember. Balanced against this weakness is the strength of the narration. It is a compelling story, the fall of a vast kingdom into civil war. Since the narration is told through the point-of-view of eight main characters, we receive a rounded view of the events and see how they affect multiple people.

So why read the book? Since the HBO series tells the same story though the same point-of-views, and since the events of Season 1 are the same events as in A Game of Thrones, why bother reading it? For me, that question doesn’t exist. Or rather, it transfers into: Why not read it? I love to read, and when I know a movie or television series is based on a novel, I prefer to read it before seeing the film. That didn’t happen in this case. I watched Season 1 before I read A Game of Thrones. Since by the end of the viewing, I knew the characters and plot, why did I bother reading the novel? Why do I believe you should read it?

Film is passive entertainment. You turn on the television or go to the theater, and you experience the story through your eyes and ears. But reading is active entertainment. You open the book and read the words, and you experience the story with your imagination. A movie or television show is a collaborative work between the director, the actors, the screenwriters, the cinematographers, and other creative and technical personnel. A novel is a collaboration between the writer and the reader. The writer records the words, but the reader envisions the story. And that imagined story stays with you longer. It feels more intimate.

That intimacy is a major reason for reading the novel, even if you had seen the series. Film is good at the visual elements of the story telling, but it is weak at the intangible elements. Thoughts, emotions, plans, fears, desires–we all carry an inner world. Fictional characters also enjoy inner worlds. It is the power of the written word to bring those inner worlds alive, to let the reader experience them as the characters experience them, and to understand what motivates the character and why. We become the characters. We sense Lord Stark’s sense of honor, because we feel it as he feels it. Like Jon Snow, we struggled to find a sense of place, our role, in a society destined to see us only as bastards. We sympathizes with Catelyn’s desire to protect her family and to seek justice for the wrong done to them. She is us; we are her. This connection comes from reading.